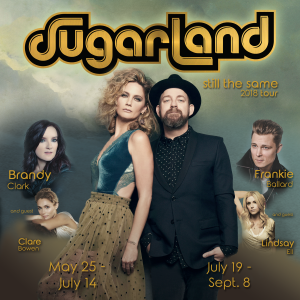 UNCASVILLE, CT (January 9, 2018) – Award-winning Country duo Sugarland announced today their highly-anticipated return to the stage with the Still The Same Tour, beginning this spring in the U.S. With numerous Grammy, ACM and CMA Awards, chart-topping hits and multi-platinum sales, the pair’s Jennifer Nettles and Kristian Bush will bring their new live show to 48 cities, including Los Angeles, Las Vegas and Nashville. The first leg of the tour will feature opening acts Brandy Clark and Clare Bowen, while Frankie Ballard and Lindsay Ell will accompany the pair for the second half. Mohegan Sun Arena is slated for the second half of the tour, with Sugarland performing on Thursday, August 30th at 7:30pm.

Tickets are $90.50, $70.50 and $50.50 and go on sale Friday, January 12th at 10:00am through Ticketmaster. Ticketmaster customers may log on to Ticketmaster.com or call Ticketmaster’s national toll free Charge By Phone number 1.800.745.3000.  Tickets will also be available at the Mohegan Sun Box Office beginning on Saturday, January 13th, subject to availability.
“We are thrilled to head back out on the road together as this has been a long time coming for the both of us,” said Nettles. “And to have Brandy, Clare, Frankie and Lindsay join us will make our return really special.”

“Can’t wait to get back out there and share our new music with the best fans on earth,” Bush continued. “It will be great to hear everyone singing the old favorites along with us all summer.”

Since the band’s inception in 2002, Sugarland has sold nearly 10 million albums domestically, earned seven #1 singles to date and amassed over 260 million on-demand streams. Their critical and mainstream appeal has been magnified with countless industry accolades over the course of their career. The hit makers recently released “Still The Same,” their first new music in seven years, aptly setting the tone for their joint venture with Big Machine Records and UMG Nashville; this summer’s tour shares its name. This rejuvenation of their musical vision remains true to the authentic sound and emotive songwriting that has made Sugarland one of the most popular Country music duos of all time.
For more information, please visit SugarlandMusic.com.