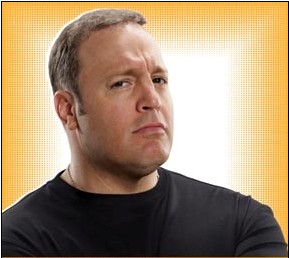 One of Comedy’s biggest acts is heading to Mohegan Sun Arena for a night of laughs. Here Comes The Boom star Kevin James will perform on Saturday, June 1st at 8:00pm.
Tickets are $45.00 and go on sale Friday, March 15th through Ticketmaster at 10:00am.  Ticketmaster customers may log on to ticketmaster.com; call Ticketmaster’s national toll free Charge By Phone number 1.800.745.3000; or visit any Ticketmaster outlet.  Tickets will also be available at the Mohegan Sun Box Office starting Saturday, March 16th, subject to availability. More details are available at mohegansun.com/entertainment as well.
Kevin James, producer, co-writer, and star of the hit comedies Paul Blart: Mall Cop (2009) and Zookeeper (2011) can be seen in his latest film, Here Comes The Boom.  James also starred in Columbia Pictures’ blockbuster Grown Ups (2010) along with Adam Sandler; previously, James and Sandler worked together on I Now Pronounce You Chuck and Larry (2007).
James broke into the film world in 2005 in Columbia Pictures’ Hitch starring opposite Will Smith, but his comedy career started well before that as a stand-up on the Long Island comedy scene.  After being discovered at the 1996 Montreal Comedy Festival, he signed a network development deal to create his own sitcom which became the enormously successful The King of Queens. The show enjoyed an 8-season run through 2007 and continues to air daily in syndication across the country and around the world.
In 2001, James brought his stand-up act to TV with Sweat the Small Stuff, a one-hour special for Comedy Central.  In 2005, Kevin James and Ray Romano executive produced and starred in the HBO Sports Special Making the Cut: The Road to Pebble Beach; a documentary about the Pebble Beach Pro Am Golf Tournament that was nominated for a Sports Emmy.
Aside from his on-camera work, James’s voice has been featured in the animated films Barnyard (2006) for Nick Movies, as well as Monster House (2006) and Hotel Transylvania (2012) for Sony Pictures Animation.
Mohegan Sun Arena is ranked 3rd in the U.S. and 5th in the world by Billboard Magazine and was the 2008 and 2010 recipient of a Country Music Award for “Casino of The Year.”  Venues Today also ranked Mohegan Sun Arena #4 in 2011 and ranked in the top six of “Top Stops of The Decade” in 2012. For more information on concerts and other great events at Mohegan Sun, visit mohegansun.com. For information on this week’s schedule, call the Entertainment and Special Events hotline at 1.888.226.7711, ext. 27163.