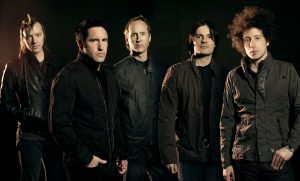 Awarded four stars by Rolling Stone and named as one of the fall’s “must-hear” albums by Entertainment Weekly – Hesitation Marks is out today. It is available as a digital download, standard CD, deluxe CD and on vinyl. Three bonus tracks – “Find My Way (Oneohtrix Point Never Remix),” “All Time Low (Todd Rundgren remix)” and “While I’m Still Here (Breyer P-Orridge ‘Howler’ Remix)” – are a part of the deluxe version.
The tour makes its way to Mohegan Sun Arena on Saturday, October 12th for a 8:00pm show.  Godspeed You! Black Emperor is the support act for this date.
Tickets are $65.00 and $45.00 and go on sale Friday, September 6th through Ticketmaster at 10:00am.  Ticketmaster customers may log on to ticketmaster.com; call Ticketmaster’s national toll free Charge By Phone number 1.800.745.3000; or visit any Ticketmaster outlet.  Tickets will also be available at the Mohegan Sun Box Office starting Saturday, September 7th subject to availability.
Recorded in Los Angeles by Trent Reznor with frequent collaborators Atticus Ross and Alan Moulder, Hesitation Marks features Lindsay Buckingham of Fleetwood Mac, Adrian Belew of King Crimson, Eugene Goreshter of Autolux, bass legend Pino Palladino and NIN regulars Alessandro Cortini, Ilan Rubin and Joshua Eustis.
“Reznor’s first NIN album in five years, it is one of his best, combining the textural exploration on the 1999 double CD The Fragile, and the tighter fury of his 1994 master blast, The Downward Spiral,” said Rolling Stone’s David Fricke in a four-star lead review. “There is blood here: Hesitation Marks refers to the preliminary wounds made during a suicide attempt. There is deliverance, too. You can dance to much of this terror, all the way to the brink and back.” The New York Times’ Jon Pareles hailed Reznor as a “taboo-smashing songwriter with music that meticulously blends melody and abrasion, ferocity and detail.”
SPIN gave Hesitation Marks a 9 out of 10 rating, noting, “this is the most important artistic statement from NIN leader Trent Reznor since the late ’90s, when SPIN dubbed him ‘the Most Vital Artist in Music Today’…. Through his own twisted K-hole, #ARTPOP icon Reznor is once again one of the most vital artists working today, coming back haunted, breaking the habitual. Let’s get physical.” Check out SPIN’s September 2013 cover story on Nine Inch Nails here.
NPR Music’s Ann Powers said, “you can feel the musicians’ interplay in the grooves…as each element of sound builds upon each other to make the songs sweet, then menacing, then nerve-wracking, then hallucinatory, they’re made whole and vividly accessible.” Alternative Press gave the album four stars, calling it “remarkably prescient,” and Entertainment Weekly observed, “Both Hesitation Marks’ lead single, ‘Came Back Haunted,’ and the propulsive, New Order-nodding ‘Everything’ rank among Reznor’s finest.”
Mohegan Sun Arena is ranked 3rd in the U.S. and 5th in the world by Billboard Magazine and was the 2008 and 2010 recipient of a Country Music Award for “Casino of The Year.”  Venues Today also ranked Mohegan Sun Arena #3 in 2012 and ranked in the top six of “Top Stops of The Decade” in 2012. For more information on concerts and other great events at Mohegan Sun, visit mohegansun.com. For information on this week’s schedule, call the Entertainment and Special Events hotline at 1.888.226.7711, ext. 27163.