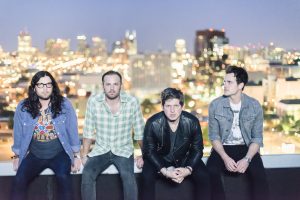 Kings of Leon announced today the first leg of their American tour in support of their recently released album, Mechanical Bull. The band will kick off the “2014 Mechanical Bull Tour” on February 5, 2014 in Atlanta and make their way to Uncasville, CT on Saturday, February 15th for an 8:00pm show at Mohegan Sun Arena. Produced by Live Nation and presented by Klipsch Audio, the tour will feature opener Gary Clark, Jr. on this first leg.
Tickets are $75.00 and $55.00 and go on sale Saturday, November 2nd at 10:00am through Ticketmaster.  Ticketmaster customers may log on to ticketmaster.com; call Ticketmaster’s national toll free Charge By Phone number 1.800.745.3000; or visit any Ticketmaster outlet.  Tickets will also be available at the Mohegan Sun Box Office starting Sunday, November 3rd, subject to availability.
American Express® Card members will have an opportunity to purchase tickets before the general public.
The “2014 Mechanical Bull Tour” is in support of Kings of Leon’s 6th album, Mechanical Bull, which was released on September 24th on RCA Records and debuted at #2 on the Billboard Top 200 Chart.  The album also bowed at #1 on the Rock and Alternative Album charts and #2 on the Digital chart.  It debuted at #1 in the UK, which makes it the fourth consecutive Kings of Leon record to do so.
The album has been hailed by music critics worldwide, with the NY Times saying that with Mechanical Bull, “anthemic is the goal and anthemic is the end result,” and Entertainment Weekly claiming the album finds the band “recapturing the white-lightning-in-a-bottle spark.”  The NY Daily News awarded the album five stars out of five, hailing that it “boasts the most clear-eyed performances, finest writing and sharpest focus of KOL’s career.”  Rolling Stone said the new songs “quake with Soul, Country and Gospel history” and MTV claimed the album is “the Kings at their most powerful and complete.”  SPIN called Mechanical Bull the band’s “most seasoned” album and said that Kings of Leon are at “the peak of their skill.”
For additional tour and ticket information, visit www.kingsofleon.com and www.livenation.com.
For the latest updates on the band, please visit:
www.kingsofleon.com
www.facebook.com/kingsofleon
www.twitter.com/kingsofleon
Mohegan Sun Arena is ranked 3rd in the U.S. and 5th in the world by Billboard Magazine and was the 2008 and 2010 recipient of a Country Music Award for “Casino of The Year.” Venues Today also ranked Mohegan Sun Arena #3 in 2012 and ranked it in the top six of “Top Stops of The Decade” in 2012. Venues Today also named Mohegan Sun Arena #4 in mid-year Top Stops for 2013. For more information on concerts and other great events visit Mohegan Sun. For information on this week’s schedule, call the Entertainment and Special Events hotline at 1.888.226.7711, ext. 27163.