Pop icons team up with TLC and Nelly for the ultimate summer concert ticket; Mohegan Sun Arena set for June 12th; The Main Event to kick off May 1st with tickets on sale January 31st at Livenation.com and Ticketmaster.com 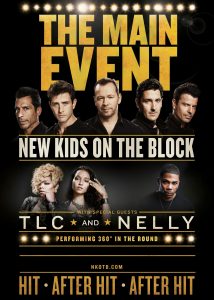 UNCASVILLE, CT (January 20, 2015) — New Kids On The Block are stepping into the ring for 2015! The Pop phenoms stopped by Good Morning America this morning to announce THE MAIN EVENT, a summer headlining tour featuring very special guests, Grammy Award-winning and multi-platinum selling artists TLC and Nelly. NKOTB surprised viewers with a special reveal of TLC and a personal message from Nelly (who is currently overseas with the armed forces). The groups hinted at possible collaborations and other exciting possibilities while on the road this summer, sending fans into a frenzy across social media. The tour, promoted by Live Nation, kicks off on May 1st in Las Vegas, Nevada and will stop in over 30 cities across North America, including Mohegan Sun Arena for a 7:00pm concert on Friday, June 12th.
Tickets are $99.50 and $59.50 and go on sale Saturday, January 31st at 10:00am through Ticketmaster and Livenation.com.  Ticketmaster customers may log on to ticketmaster.com; call Ticketmaster’s national toll free Charge By Phone number 1.800.745.3000; or visit any Ticketmaster outlet.  Tickets will also be available at the Mohegan Sun Box Office starting Sunday, February 1st, subject to availability.
American Express card members can get advance tickets beginning this Friday, January 23rd at 10:00am (local time). Fans will have additional opportunities to purchase tickets early starting Wednesday, January 28th by signing up for a Facebook RSVP at http://smarturl.it/NKOTB_RSVP. Tickets can be purchased starting January 31st on www.livenation.com.
After announcing the tour on Good Morning America, NKOTB took over the LIVE! with Kelly and Michael set to step in and play a mix of super hits and new fan favorites throughout the entire hour on air. The morning TV whirlwind was followed up with an NKOTB/TLC media blitz. The groups shut down Chase Plaza at Madison Square Garden for a press conference filled with media and ecstatic fans, talking with outlets like Access Hollywood, E!, Entertainment Tonight, EXTRA, Associated Press and BuzzFeed. Social media has been abuzz ever since the official reveal with no signs of slowing down.
“We always have something special up our sleeves,” said NKOTB member Donnie Wahlberg. “Our fans keep asking us to come back out on the road and we want to keep giving them what they want!  We wanted to make sure it was something new and fresh and fun and totally worthwhile for all of our supporters year after year.  This year, we are making it The Main Event.  And we promise, it will be the ticket of the summer.”
With all-new and top-notch production elements, this tour is sure to be the ultimate summer concert ticket as promised. The highlights will include a 360-degree stage “in the round.” With no obstructions, the stage set up will offer optimal viewing. The bands have worked hard on the show and staging concept to make sure that everyone in the house has a part of the action, up close and center.
“We are thrilled to be able to join Pop icons NKTOB and Nelly on tour. We are equally excited to be back on the road connecting with our fans in such huge arenas,” said TLC.
Please visit www.NKOTB.com, www.livenation.com or www.ticketmaster.com for up to date information or join the discussion at #themainevent.
NEW KIDS ON THE BLOCK sold more than 80 million albums worldwide — including back-to-back international #1 songs, 1988’s “Hangin’ Tough” and 1990’s “Step By Step” — and a series of crossover smash R&B, pop hits like “You Got It (The Right Stuff),” “Cover Girl,” “Didn’t I (Blow Your Mind This Time),” “Hangin’ Tough,” “I’ll Be Loving You,” “Step By Step” and “Tonight.”
The group shattered concert box office records playing an estimated 200 concerts a year, in sold out stadiums throughout the world.  They still hold many of these records to date. They were Forbes highest paid entertainers of 1990, beating out Michael Jackson and Madonna. The band boasted an extensive and highly profitable merchandise line which included everything from lunch boxes and sleeping bags to comic books, marbles and dolls.  More Information is available at www.nkotb.com.
Live Nation Entertainment (NYSE: LYV) is the world’s leading live entertainment company comprised of global market leaders: Ticketmaster, Live Nation Concerts, Live Nation Media & Sponsorship and Artist Nation Management. For additional information, visit www.livenationentertainment.com.
Follow us @twitter.com/LiveNationInc
SOURCE: Live Nation Entertainment
Mohegan Sun Arena is now ranked consistently among the top venues in the world according to Billboard Magazine, Pollstar and Venues Today. It has won “Casino of The Year” at the Country Music Awards in 2008 & 2010 and in 2013, was voted “Arena Of The Year” at the G2E Global Gaming Conference in Las Vegas. Also in 2013, Mohegan Sun won “Casino of The Year” in 2 categories at the Academy of Country Music Awards. For more information on concerts and other great events visit Mohegan Sun. For information on this week’s schedule, call the Entertainment and Special Events hotline at 1.888.226.7711, ext. 27163.