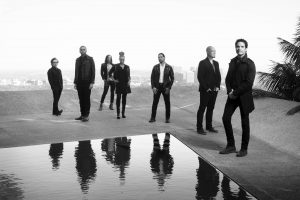 UNCASVILLE, CT (January 20, 2015) — Chart-topping San Francisco-natives Train are taking their latest hit album Bulletproof Picasso on the road with a 40+ city summer tour across North America with special guests The Fray and Matt Nathanson. The Picasso At The Wheel Summer Tour 2015, promoted by Live Nation, begins Thursday, May 21st at the Sleep Train Amphitheatre in Sacramento, CA and will conclude in Quincy, Wash. on Saturday, July 25 at The Gorge Amphitheatre for the band’s first ever Picasso Music, Food and Wine Festival. Not before a stop at Mohegan Sun Arena on Sunday, June 21st however for a 7:00pm concert. Fans will have a chance to witness the band perform tracks from the new album—including the Top 10 radio single “Angel in Blue Jeans,” “Cadillac, Cadillac” and their new single “Bulletproof Picasso”—along with their many enigmatic, signature hits from the past 20 years.
Tickets are $75.00 and $55.00 and go on sale Saturday, January 24th at 10:00am through Ticketmaster and Livenation.com.  Ticketmaster customers may log on to ticketmaster.com; call Ticketmaster’s national toll free Charge By Phone number 1.800.745.3000; or visit any Ticketmaster outlet.  Tickets will also be available at the Mohegan Sun Box Office starting Sunday, January 25th, subject to availability.
Fans are also encouraged to show up early for the Patcast Tailgate tent, where Pat Monahan will periodically make an appearance throughout the tour. Located in the venue parking lot each night, ticket-holders can tailgate and enjoy Classic Rock DJ, give shout-outs to friends on the Patcast (Pat’s weekly podcast), and enter to win various prizes. The Patcast  tent will also be the place for fans to register for the Mermaid Costume Contest and a chance to be brought onstage.
VIP bundles and experiences will be available through Train’s fan presale beginning Tuesday, January 20th at 10:00am local time – information on how to purchase will be available on all of Train’s social media accounts. Citi® cardmembers will have access to pre-sale tickets beginning Wednesday, January, 21st at 10:00am local time through Citi’s Private Pass® Program. For complete pre-sale details, visit www.citiprivatepass.com.

Train also announced today their new single “Bulletproof Picasso” and its forthcoming music video, which will feature guest stars Emily Kinney (Beth on AMC’s The Walking Dead) and Reid Ewing (Dylan on ABC’s Modern Family). The band performed the title track this morning on LIVE! with Kelly and Michael in its television debut, and the video will premiere on VEVO on January 23rd.

Bulletproof Picasso—the band’s 7th studio album—debuted at #5 on the Billboard Top 200 in September 2014 and earned rave reviews. USA Today’s Elysa Gardner remarks that “the best tracks… are the driving and high-spirited ones, where Pat Monahan’s sweet, keening tenor – evoking cative here of a Wings-era Paul McCartney – rides meaty but crisply percussive arrangements” and Billboard’s Richard Bienstock says the band’s “wholehearted embrace of Pop has unshackled Train, allowing it to revel in anything-goes stylistic tourism” that all feels “oddly cohesive, with the band’s Rocker roots showing an impressive pliability to move within Pop’s boundaries.”
Train has successfully traveled the nearly-unnavigable path of a contemporary, hit-making Rock band while keeping their heads. The climb to the top began in San Francisco in 1994. The original 5-member band tenaciously built a loyal following, leading up to their own self-titled debut album, released by Columbia in 1998.  The tumbling wordplay of “Meet Virginia” gave them their first unlikely radio hit, with 2001’s Drops Of Jupiter garnering multi-platinum status thanks to the double-Grammy winning title song that spent 10 months in the Top 40.  In their typical ‘you-gotta’-nail-it-down-motherfucker’ style, the quixotic song snared the “Best Rock Song” trophy by beating out Coldplay and two U2 songs.
The group won another Grammy in 2011 for their global hit “Hey Soul Sister,” the #1 best-selling smash and most downloaded single of 2010, from their multi-platinum album Save Me, San Francisco.  Their most recent album, 2012’s California 37 launched the hit “Drive By,” which reached the Top 10 in 13 countries.  They’ve sold more than 10 million albums worldwide, more than 30 million tracks, with multiple platinum/gold citations, including 3
Grammy Awards, 2 Billboard Music Awards and dozens of other honors. Additionally, Train’s award-winning Save Me, San Francisco Wine Co. has recently released their 6th varietal, ‘Bulletproof Picasso’ sauvignon blanc. Proceeds from the wine support Family House, a San Francisco charity that supports families of children with cancer and other life-threatening illnesses.
Mohegan Sun Arena is now ranked consistently among the top venues in the world according to Billboard Magazine, Pollstar and Venues Today. It has won “Casino of The Year” at the Country Music Awards in 2008 & 2010 and in 2013, was voted “Arena Of The Year” at the G2E Global Gaming Conference in Las Vegas. Also in 2013, Mohegan Sun won “Casino of The Year” in 2 categories at the Academy of Country Music Awards. For more information on concerts and other great events visit Mohegan Sun. For information on this week’s schedule, call the Entertainment and Special Events hotline at 1.888.226.7711, ext. 27163.