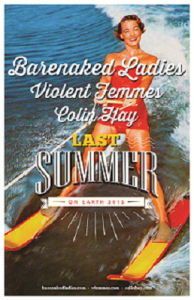 UNCASVILLE, CT (February 10, 2015) — BARENAKED LADIES will be heading back out on the road this summer for their 2015 Last Summer on Earth Tour. Joined by special guests Violent Femmes and Colin Hay of Men At Work, the Ladies are once again recreating their winning formula with performances in 30+ amphitheaters across the country. Tour kicks off on June 5th in Columbus, OH and stops at Mohegan Sun Arena for a Saturday, June 27th concert, starting at 7:30pm. The tour wraps on July 26th in Seattle, WA.  For updates on VIP packages and more information visit barenakedladies.com.
Tickets are $33.50 and go on sale Friday, February 20th through Ticketmaster at 10:00am.  Ticketmaster customers may log on to ticketmaster.com; call Ticketmaster’s national toll free Charge By Phone number 1.800.745.3000; or visit any Ticketmaster outlet.  Tickets will also be available at the Mohegan Sun Box Office starting Saturday, February 21st, subject to availability.
Ed Robertson states, “It’s the Last Summer On Earth… Again! It’s not a doomsday prediction; it’s a call to action. We sincerely hope this won’t be the Last Summer on Earth, but just in case, we’re going to ROCK like it is!!”
The 2015 Last Summer on Earth Tour coincides with the release of the band’s, as yet untitled, new album due out on Vanguard Records later this summer. Fans that purchase tickets to the 2015 Last Summer on Earth Tour will instantly receive one track from the new album and a digital download of the full album upon release.
BARENAKED LADIES featuring  (guitarist/vocalist Ed Robertson, bassist/vocalist Jim Creeggan, keyboardist/vocalist Kevin Hearn and drummer/vocalist Tyler Stewart) have sold over 14 million albums worldwide and have won eight Juno awards and earned multiple Grammy nominations.  Known for such hits as “One Week,” “Pinch Me, “Brian Wilson,” “If I Had $1,000,000” and many more, the band also penned the theme song for the hit CBS series, The Big Bang Theory.  Their latest album, Grinning Streak, debuted at #10 on the Billboard Top 200.  The album’s breakout success showcased the single “Odds Are,” which shot to #2 on the iTunes Rock Songs chart. The Barenaked Ladie’s live shows have become legendary with their hilarious on-stage banter and impromptu raps.
Mohegan Sun Arena is now ranked consistently among the top venues in the world according to Billboard Magazine, Pollstar and Venues Today. It has won “Casino of The Year” at the Country Music Awards in 2008 & 2010 and in 2013, was voted “Arena Of The Year” at the G2E Global Gaming Conference in Las Vegas. Also in 2013, Mohegan Sun won “Casino of The Year” in 2 categories at the Academy of Country Music Awards. For more information on concerts and other great events visit Mohegan Sun. For information on this week’s schedule, call the Entertainment and Special Events hotline at 1.888.226.7711, ext. 27163.