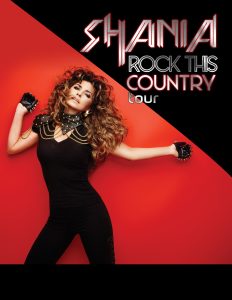 UNCASVILLE, CT (March 4, 2015) – One of the world’s best-selling female artists in history, Shania Twain, has announced her first North American tour in more than 11 years entitled ROCK THIS COUNTRY.   The 48 date run comes hot on the heels of her hit two-year residency in Las Vegas at The Colosseum at Caesars Palace. Mohegan Sun Arena welcomes Shania Twain for a Friday, July 3rd concert, beginning at 7:30pm and features Grammy Award nominated singer/songwriter, Gavin DeGraw.
Tickets are $180.00, $130.00 and $100.00 go on sale Friday, March 20th through Ticketmaster at 10:00am.  Ticketmaster customers may log on to ticketmaster.com; call Ticketmaster’s national toll free Charge By Phone number 1.800.745.3000; or visit any Ticketmaster outlet.  Tickets will also be available at the Mohegan Sun Box Office starting Saturday, March 21st, subject to availability.
A limited number of exclusive VIP Packages also will be available. Theses offers can include premium reserved tickets, access to Shania Twain’s preshow VIP sound check, exclusive merchandise and much more. A $1.00 donation from each ticket purchased will go to the Shania Kids Can Foundation. For more information visit Shaniatwain.com.
Presented by AEG Live, Shania’s tour kicks off in North America on June 5th in Seattle, WA where she will perform her extensive catalog of iconic hits in a brand new production for fans coast to coast.

“This is a celebration tour. It’s party time!  The ROCK THIS COUNTRY tour will have a different spirit than my past tours,” said Twain. “It’s a Shania they’ve never seen before.  A lot of years have gone by and I’ve got a lot more to share.”
Beloved by millions worldwide, Shania has multi-platinum album sales in 32 countries with over 75 million albums sold, and 17 top 10 singles. Three of Shania’s albums (The Woman In Me, Come On Over, Up! ) reached Diamond certification, making her the only artist to have three consecutive albums sell more than 10 million copies in the US.
Rising to fame with her debut album Shania Twain (1993), Shania became a worldwide phenomenon with the release of Come On Over (1997), which became the best-selling country album of all time, and the best-selling album released by a female artist. Most recently, Shania performed 105 shows during her two-year Las Vegas residency, Shania: Still The One, beginning on December 1, 2012 at The Colosseum at Caesars Palace and wrapping in December of 2014. The show garnered rave reviews throughout its tenure.
Mohegan Sun Arena is now ranked consistently among the top venues in the world according to Billboard Magazine, Pollstar and Venues Today. It has won “Casino of The Year” at the Country Music Awards in 2008 & 2010 and in 2013, was voted “Arena Of The Year” at the G2E Global Gaming Conference in Las Vegas. Also in 2013, Mohegan Sun won “Casino of The Year” in 2 categories at the Academy of Country Music Awards. For more information on concerts and other great events at Mohegan Sun, visit mohegansun.com. For information on this week’s schedule, call the Entertainment and Special Events hotline at 1.888.226.7711, ext. 27163.