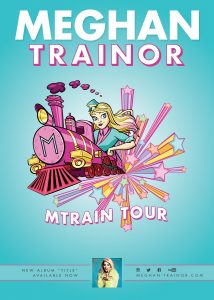 UNCASVILLE, CT (March 17, 2015) – Just as her sold out That Bass Tour comes to a close this week, Grammy Award-nominated multi-platinum global superstar Meghan Trainor reveals dates for her headline summer jaunt—The Mtrain Tour—supporting her #1 debut album Title [Epic Records]. The tour hits Mohegan Sun Arena for a Saturday, July 4th concert beginning at 7:00pm.  British trio Life of Dillon will open The Mtrain Tour!
Tickets are $45.00 and go on sale Friday, March 20th through Ticketmaster at 10:00am.  Ticketmaster customers may log on to ticketmaster.com; call Ticketmaster’s national toll free Charge By Phone number 1.800.745.3000; or visit any Ticketmaster outlet.  Tickets will also be available at the Mohegan Sun Box Office starting Saturday, March 21st, subject to availability. Tickets for this performance will also be on sale at Live Nation on March 20th.
Promoted exclusively by Live Nation, The Mtrain Tour kicks off Friday July 3rd at Borgata in Atlantic City, NJ and will make stops in nearly 30 major markets across the country this summer.
Following a string of scorching performances, Trainor’s show promises to be one of the hottest tickets of the summer. Don’t miss it!  For all the latest updates on The Mtrain Tour, visit meghan-trainor.com.
In tandem with the tour announcement, she premiered the undeniable, unique and unforgettable music video for new single “Dear Future Husband” on NBC’s The Today Show and Cosmopolitan.com this morning. Recently certified gold by the RIAA, the track impacts radio today as well.  You can see the video here http://smarturl.it/DFHvideo.
Fans and tastemakers continue to recognize her as Pop culture trailblazer and a dynamic presence. She’s nominated for “Favorite New Artist” and “Song of the Year” for “All About That Bass” at 2015 Kids’ Choice Awards, airing March 28th on Nickelodeon. The next day Sunday, March 29th, she will perform at the iHeartRadio Music Awards in Los Angeles broadcast live on NBC from The Shrine Auditorium. At the ceremony, she’s also nominated in three top categories including “Best New Artist,” “Renegade” and “Song of the Year” for “All About That Bass.”

This week, Meghan will appear on The Voice as the mentor for Blake Shelton’s team. She also graces the cover of the February issue of Seventeen Magazine.
Continuing this incredible streak of success, “All About That Bass” now is 6-times platinum and its follow-up “Lips Are Movin’” went double-platinum, while the sold out That Bass Tour has been receiving unanimous critical praise. This was Trainor’s very first tour, and each date actually sold out well in advance, proving her status as a live phenomenon.
About the That Bass Tour, Billboard claimed, “Trainor stretched her set in ways that felt authentic,” while The Hollywood Reporter wrote, “The lifelong performer took advantage of the venue’s intimacy while also seizing the opportunity to serve a spectacle.” The Chicago Tribune said, “After a year that set the 21-year-old on an unexpected Pop star path, Trainor hit the stage in Chicago and showed that she had the verve and talent to justify her rise,” The Washington Post added, “Trainor’s voice sparkled almost as much as the bejeweled mike she poured it into,” and The OC Register claimed, “Her brand of Doo-Wop and Bubble Gum Pop, infused with bits of Funk and Hip-Hop, coupled with a sassy attitude and lyrics about female empowerment, have quickly made her a star.”
As soon as Title became available, it vaulted to the top of dozens of charts worldwide. With first-week sales of 237,511 units in total music consumption (albums/singles/streaming), the album ranks as the biggest-selling debut for a female artist’s first full-length album in more
than five years; and the biggest-selling debut for a solo artist’s first full-length album in more than three years. Title has dominated iTunes Overall and Pop album charts in the U.S. at #1 since its release on January 13th, with #1 peaks reported from 67 countries worldwide.
Early critical reaction to Title was unanimously positive, with Rolling Stone magazine hailing Meghan’s “sass and self-empowerment,” and People proclaiming “she’s an It girl with staying power.” The New York Times profiled Meghan with references to Amy Winehouse and Adele; while Entertainment Weekly awarded the Title album an A-, declaring “right now, no Pop star is better than this 21-year-old singer, songwriter and producer at playing the sassy best friend.”  Billboard summed up, “You can’t miss this young artist’s skill with melodic and rhythmic hooks…along with her fluid, flexible voice.”
“All About That Bass” is a juggernaut in and of itself. Meghan’s phenomenal two-time Grammy®-nominated debut single spent eight weeks at #1 on the Billboard Hot 100, and has been certified 6-times RIAA platinum in the U.S. alone. The song has worked its way into Pop culture with numerous cover versions and homages, including NBC’s Saturday Night Live and The Tonight Show with Jimmy Fallon (with collective YouTube views of more than 40 million).
Globally, “All About That Bass” has hit #1 in 58 countries, generated more than 10 million downloads, over 275 million streams, and nearly 700 million YouTube views to date. The follow-up single “Lips Are Movin”  has been certified RIAA double platinum, has reached the top five on the Billboard Hot 100, top five at Top 40 radio and has over 180 million video views.
Don’t miss The Mtrain Tour this summer!   More info can be found on Meghan’s official website meghan-trainor.com.
Mohegan Sun Arena is now ranked consistently among the top venues in the world according to Billboard Magazine, Pollstar and Venues Today. It has won “Casino of The Year” at the Country Music Awards in 2008 & 2010 and in 2013, was voted “Arena Of The Year” at the G2E Global Gaming Conference in Las Vegas. Also in 2013, Mohegan Sun won “Casino of The Year” in 2 categories at the Academy of Country Music Awards. For more information on concerts and other great events at Mohegan Sun, visit mohegansun.com. For information on this week’s schedule, call the Entertainment and Special Events hotline at 1.888.226.7711, ext. 27163.