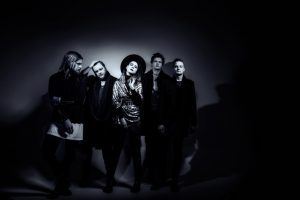 UNCASVILLE, CT (May 27, 2015) – OF MONSTERS AND MEN officially announce dates for their upcoming North American headline tour in support of their highly anticipated sophomore album, Beneath The Skin [Republic Records], out June 9th.
This tour kicks off August 5th in Calgary, Alberta Canada and plays major markets across the continent and concludes October 17 in San Diego, CA.  Mohegan Sun Arena will welcome the band for a Saturday, September 26th concert, beginning at 7:30pm and will feature special guests, Highasakite
Tickets are $35.00 and go on sale Friday, June 5th through Ticketmaster at 10:00am. Ticketmaster customers may log on to ticketmaster.com; call Ticketmaster’s national toll free Charge By Phone number 1.800.745.3000; or visit any Ticketmaster outlet. Tickets will also be available at the Mohegan Sun Box Office starting Saturday, June 6th, subject to availability.
Fans can access a special pre-sale via the group’s official site, today. This adds to their already packed summer schedule with confirmed festival appearances including Sasquatch, Osheaga, Lollapolooza, Toronto Urban Roots Festival, Austin City Limits and more.
Yesterday the band released a new track “Hunger” off of the LP. The haunting tack premiered on Nylon.com and is available for instant download with purchase of Beneath The Skin. Watch it here! On “Hunger” Nanna Bryndís Hilmarsdóttir recalls: “The first idea for “Hunger” came on our last tour. I was always playing this one verse again and again on the bus, obsessing over it. Some songs kind of do that to you. So it was in the works for a long time before we actually started making a song out of it.” Those who pre-order the album will also receive instant downloads of “Crystals,” “I Of The Storm” and “Empire.”  Pre-order it here!
In addition, as fans await the arrival of Beneath The Skin, the multi-platinum Icelandic group have created a series of intimate behind-the-scene vignettes following the making of the record. A new clip will premiere each week leading up to the June 9th release. The exclusive series documents Beneath The Skin’s creation with up-close-and-personal documentary footage and dives into the stories behind the album’s lyrics, production, composition and more. You can watch the first clip on Billboard.com.
Meanwhile, the music video for Beneath The Skin’s first single “Crystals” debuted last week with Entertainment Weekly raving “(The video) Led by Nanna Bryndís Hilmarsdóttir with gold-flaked eye shadow and metallic accents dripping from her lashes – overseeing her bandmates in an almost-Frankensteinian affair, the video is as captivating as its track.” Check out the breathtaking video here.
OF MONSTERS AND MEN have come a long way from their native Iceland. They quickly became a phenomenon in 2011 with the quadruple-platinum “Little Talks” and their chart-topping debut, My Head Is An Animal, which has since moved 2 million copies worldwide. Since then, the group has delivered rapturous performances at festivals such as  Lollapalooza, Bonnaroo, Coachella, Newport Folk Festival, Osheaga, Glastonbury, Reading and Leeds, Pukkelpop, and Splendour in the Grass as well as at countless sold out headline shows the world over. They have charmed TV audiences with appearances on The Tonight Show with Jay Leno, Late Night with Jimmy Fallon, The Graham Norton Show and Saturday Night Live. In the midst of it all, they lent the single “Dirty Paws” to a trailer for The Secret Life of Walter Mitty and the iPhone 5 introduction video, while “Silhouettes” was featured on The Hunger Games: Catching Fire soundtrack.
Mohegan Sun Arena is now ranked consistently among the top venues in the world according to Billboard Magazine, Pollstar and Venues Today. It has won “Casino of The Year” at the Country Music Awards in 2008 & 2010 and in 2013, was voted “Arena Of The Year” at the G2E Global Gaming Conference in Las Vegas. Also in 2013, Mohegan Sun won “Casino of The Year” in 2 categories at the Academy of Country Music Awards. Mohegan Sun Arena was also ranked among the top 10 Arena venues in the nation for 2014, regardless of size. For more information on concerts and other great events, visit Mohegan Sun. For information on this week’s schedule, call the Entertainment and Special Events hotline at 1.888.226.7711, ext. 27163.