“A fluid and an intelligent player. There are not many like that around” – Pete Townshend, Rolling Stone Magazine 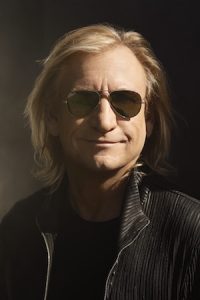 UNCASVILLE, CT (July 27, 2015) – On September 18, 2015 Joe Walsh will launch his Fall solo tour that will carry on through October 17th. Mohegan Sun Arena will host Walsh for an 8:00pm show on Friday, October 16th. The tour also hits Ohio and Ontario, but primarily showcases dates on the eastern seaboard, with New York, New Jersey, Massachusetts, Pennsylvania, and North Carolina all set to welcome the Rock legend.
Tickets are $39.50 and go on sale Friday, July 31st through Ticketmaster at 10:00am.  Ticketmaster customers may log on to ticketmaster.com; call Ticketmaster’s national toll free Charge By Phone number 1.800.745.3000; or visit any Ticketmaster outlet.  Tickets will also be available at the Mohegan Sun Box Office starting Saturday, August 1st, subject to availability.
This tour will reunite Joe with one of his Barnstorm band members, keyboardist and drummer Joe Vitale.  Additionally Walsh will be supported with band members Gannin Arnold on guitar, Tommy Simms on bass and Drew Hester on drums.
Joe will be performing hits from throughout his career, ranging from the James Gang to his Barnstorm days, to the Eagles and his solo records right through to 2012’s ANALOG MAN, and some surprises:
“I’m going back in the catalog to dig out some songs that I haven’t ever played live, but everything everyone’s coming to hear will also be in the show,” Joe said.  “I’ve got a great band and I’m excited to play with my old friend Joe Vitale again. I also love being able to go into smaller venues. I’ve missed it…The interaction with the audience is much better, everybody has a good seat and it reminds me of the old days. I think I play my best in a small venue when the bass drums are kicking me in the pants. I’m really looking forward to it all.”
ABOUT JOE WALSH:
Best known for his powerful guitar licks, Joe Walsh has entertained the masses and captivated his peers for more than three decades with such classics as “Funk #49,” “Walk Away,” “Life’s Been Good” and “Ordinary Average Guy.” In 1969 Walsh found success with The James Gang, followed by a stint with Barnstorm, a trio he founded.  In 1973 Joe released his first solo album, which proved him a legitimate solo act with a limitless career on the horizon. By 1975 he joined The Eagles, bringing a harder Rock sound to the group with the acclaimed Hotel California, The Long Run and Eagles Live.
In 1994, after a 14-year hiatus and several solo albums, The Eagles released Hell Freezes Over, which reached #1 on the Billboard charts and sparked one of the most successful tours in music history. And in 1998 The Eagles were inducted into the Rock and Roll Hall of Fame, the first year they were nominated. Walsh performed at the 2012 Grammys with Paul McCartney, Bruce Springsteen and Dave Grohl and at the 2012 MusiCares event honoring Paul McCartney. That June Walsh released Analog Man, his first solo album in 20 years, performing solo shows around the world to support it throughout that year. In 2013 the award winning The History of The Eagles showcased at Sundance, the two part authorized documentary and in February it aired on Showtime. In conjunction with the April release onto DVD the Eagles began their extensive The History of The Eagles World Tour. On February 9, 2014, Walsh was featured in several songs on the CBS Special The Night The Changed America: A Grammy Salute to The Beatles. In 2014 Walsh played select solo shows as well as with the Eagles on The History of The Eagles World Tour, with new dates continuing throughout 2015.  In April 2015 Walsh performed with Paul McCartney and Ringo Starr for Starr’s Induction into The Rock and Roll Hall of Fame, later broadcast on HBO. In May 2015 Walsh joined Eddie Vedder and Pete Townshend for an All Star Celebration of The Who’s music to benefit Teen Cancer America.
For more information please visit: JoeWalsh.com

Mohegan Sun Arena is now ranked consistently among the top venues in the world according to Billboard Magazine, Pollstar and Venues Today. It has won “Casino of The Year” at the Country Music Awards in 2008 & 2010 and in 2013, was voted “Arena Of The Year” at the G2E Global Gaming Conference in Las Vegas. Also in 2013, Mohegan Sun won “Casino of The Year” in 2 categories at the Academy of Country Music Awards. Mohegan Sun Arena was also ranked among the top 10 Arena venues in the nation for 2014, regardless of size. For more information on concerts and other great events, visit Mohegan Sun. For information on this week’s schedule, call the Entertainment and Special Events hotline at 1.888.226.7711, ext. 27163.