UNCASVILLE, CT (October 6, 2015)- The Mohegan Sun Marketing Department recently promoted two employees to Director positions. Mohegan Sun is pleased to announce Kimberly Noto as the Director of Campaign Management and Analytics and Jesse Sturges as Director of Strategic Marketing.
Noto has been with Mohegan Sun since 2007. Prior to this promotion, Noto served as the Marketing Analysis Manager. Noto has also held several key positions within Marketing during her time with Mohegan Sun including Senior Marketing Analyst. Noto has worked hard to move Mohegan’s analytics capabilities into the 21st century, and she will continue those efforts throughout the entire marketing campaign process.
Noto received a Bachelor of Science in Business Administration from Bryant University in Smithfield, Rhode Island. She went on to earn her Masters in Business Administration, Business Analytics from the University of Hartford in West Hartford, Connecticut. 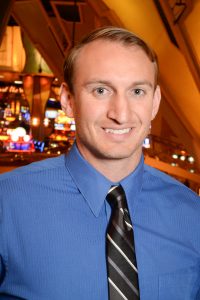 Sturges has been with Mohegan Sun since 2008. Sturges started out as a Professional Development Program Associate where he rotated through various marketing departments to learn the role and strategy of putting together an effect marketing game plan. Prior to his promotion, Sturges most recently held the position of Revenue Management Manager. In his new position, Sturges is responsible for overseeing the Revenue Management and VIP Services departments as well as the development and implementation of revenue and profit maximization strategies.
Sturges received a Bachelor of Science, Business Management from Springfield College in Springfield, Massachusetts. In 2011 he earned a certificate in Hotel Revenue Management from Cornell University in Ithaca, New York.
About Mohegan Sun
Mohegan Sun, owned by the Mohegan Tribal Gaming Authority, is one of the largest, most spectacular entertainment, gaming, dining and shopping destinations in the United States. Situated on 185 acres along the Thames River in scenic southeastern Connecticut, Mohegan Sun is home to three unique casinos, a 34-story, 1,200 room luxury hotel, a world-class spa and golf course, over 85 shops, restaurants and bars as well as three award-winning entertainment venues including a 10,000-seat Arena. Mohegan Sun is within easy access of New York, Boston, Hartford and Providence and located 15 minutes from the museums, antique shops and waterfront of Mystic Country. More information is available by calling 1.888.226.7711 or visiting mohegansun.com. Connect with us on     Facebook, follow us on Twitter and view us on YouTube.