“I Know What You Did Last Summer” By Shawn Mendes and Camila Cabello (From Fifth Harmony) now approaching platinum, firmly top 10 at Pop Radio and Top 10 on itunes; “Stiches,” certified 4x platinum. 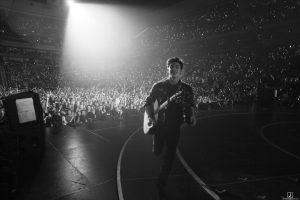 UNCASVILLE, CT (January 28, 2016) – With his #1 debut platinum album, #1 single “Stitches” and now second Pop Radio hit “I Know What You Did Last Summer” extending his momentum into the new year, Island Records recording artist Shawn Mendes has announced his 38 date Shawn Mendes World Tour. The new dates start in Europe with 11 shows in April-May and then arrive in North America with 26 dates starting on July 15th at Mizner Park Amphitheater and making its way to Mohegan Sun Arena for a Friday, August 19th concert beginning at 7:30pm.
Tickets are $35.00 and go on sale Saturday, February 6th through Ticketmaster at 10:00am.  Ticketmaster customers may log on to ticketmaster.com; call Ticketmaster’s national toll free Charge By Phone number 1.800.745.3000; or visit any Ticketmaster outlet.  Tickets will also be available at the Mohegan Sun Box Office starting Sunday, February 7th, subject to availability.
Fan Club pre-sale for the Shawn Mendes World Tour will start on February 1st at 4:00pm local time, American Express® Card Members can purchase tickets in select markets before the general public beginning Tuesday, February 2nd at 10:00am local time through Friday, February 5th at 10:00pm local time. Fans can access the pre-sale by going to ShawnAccess.com, getting a code and then purchasing the “ShawnAccess Tour Passport Pre-sale Bundle” on the show’s ticketing site. First 50 ticket purchases in each city (25 from pre-sale, 25 from regular on-sale) will win a Meet-&-Greet with Shawn at their respective concerts.
“I Know What You Did Last Summer,” the single by Shawn and Camila Cabello of Fifth Harmony which is now approaching platinum, has gone Top 10 at Pop Radio, Top 10 on iTunes, Top 20 on the U.S. Spotify chart and Top 30 on Spotify’s Global Top 50. The video for “IKWYDLS” is currently past 40 million YouTube views.  Shawn and Camila wrote the song together backstage in his green room at Taylor Swift’s The 1989 World Tour show last summer, and recorded it secretly in New York and Los Angeles.
When Handwritten, now platinum with a total of over 2 million global adjusted sales, entered Soundscan at #1 last year, it made Shawn the youngest artist in five years to chart a #1 album on the Billboard 200.  “IKWYDLS” follows up Shawn’s run of consecutive hit singles “Life of The Party” (RIAA platinum), “Something Big” (RIAA platinum) and “Stitches” (RIAA 4x-platinum).  “Stitches” went to #1 on US Pop and Hot AC radio, becoming a certifiable airplay and sales smash around the world.  In addition to topping the official singles chart in the UK this week, the single has hit #1 on iTunes in over 20 markets, and reached Top 5 on the Global Spotify chart.  Shawn also took home the MTV EMA for “Best New Artist” and the People’s Choice Award for “Favorite Breakout Artist.”
Shawn Mendes socials:
VEVO Views: over 430 million
Vine Followers: over 4.5 million
Twitter Followers: over 5.3 million
Instagram Followers: over 7.2 million
Facebook Likes: over 3.4 million
shawnmendesofficial.com
Mohegan Sun Arena is now ranked consistently among the top venues in the world according to Billboard Magazine, Pollstar and Venues Today. It has won “Casino of The Year” at the Country Music Awards in 2008 & 2010 and in 2013, was voted “Arena Of The Year” at the G2E Global Gaming Conference in Las Vegas. Also in 2013, Mohegan Sun won “Casino of The Year” in 2 categories at the Academy of Country Music Awards. Mohegan Sun Arena was also ranked among the top 10 arena venues in the nation for 2014, regardless of size. In 2015, Mohegan Sun took home the IEBA award for “Casino of the Year.” For more information on concerts and other great events, visit Mohegan Sun. For information on this week’s schedule, call the Entertainment and Special Events hotline at 1.888.226.7711, ext. 27163.