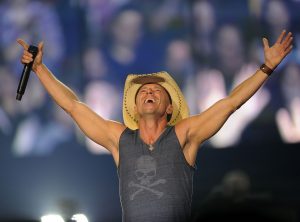 UNCASVILLE, CT (February 9, 2016) – After breaking nine attendance records – many his own – and selling in excess of 1.3 million tickets on The Big Revival Tour, Kenny Chesney wanted to harness the energy of last year’s audiences. This 2016 tour is named Spread the Love to reflect the No Shoes Nation’s passion for living life and loving music and Mohegan Sun Arena is primed to host back-to-back shows, beginning with a Friday, May 13th concert beginning at 7:30pm. Chesney will take the stage again the following evening, on Saturday, May 14th. Special guests for both shows will be ACM “Vocal Group of the Year” nominees, Old Dominion.
Tickets are $125.00 & $95.00 and go on sale Friday, February 12th through Ticketmaster at 10:00am.  Ticketmaster customers may log on to ticketmaster.com; call Ticketmaster’s national toll free Charge By Phone number 1.800.745.3000; or visit any Ticketmaster outlet.  Tickets will also be available at the Mohegan Sun Box Office starting Saturday, February 13th, subject to availability.
Old Dominion are becoming Nashville’s band of songwriters on the verge of their very first #1 with “Break Up With Him.” In addition to penning Chesney’s three-week #1 “Save It For A Rainy Day,” members of the good-vibe group of musicians have written chart-toppers for Blake Shelton (“Sangria”), The Band Perry (“Better Dig Two”), Tyler Farr (“Guy Walks Into A Bar”) and Dierks Bentley (“Say You Do”).
“There is nothing like the energy of a stadium show,” Chesney said. “Old Dominion kicked the whole summer off last year with the best vibe. If we’re talking about Spread the Love, those guys are all about it. If there’s anything I want to see this summer, it’s that attitude that really defines what’s going on.”
“Two parts Mick Jagger, one part Bruce Springsteen and one part Billy Graham,” The Dallas Morning News deemed Chesney this summer – and the man hailed as “The King of the Road” takes his shows very seriously. “After last year, we’ve got a bar to clear, but I am fired up… and missing the fans already. There are a bunch more dates coming, but let’s get the first wave of major stadium shows on the calendar right now!”
Mohegan Sun Arena is now ranked consistently among the top venues in the world according to Billboard Magazine, Pollstar and Venues Today. It has won “Casino of The Year” at the Country Music Awards in 2008 & 2010 and in 2013, was voted “Arena Of The Year” at the G2E Global Gaming Conference in Las Vegas. Also in 2013, Mohegan Sun won “Casino of The Year” in 2 categories at the Academy of Country Music Awards. Mohegan Sun Arena was also ranked among the top 10 arena venues in the nation for 2014, regardless of size. In 2015, Mohegan Sun took home the IEBA award for “Casino of the Year.” For more information on concerts and other great events, visit Mohegan Sun. For information on this week’s schedule, call the Entertainment and Special Events hotline at 1.888.226.7711, ext. 27163.