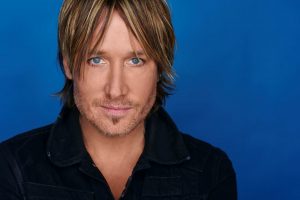 American Idol judge Keith Urban will bring his “ripCORD World Tour 2016” to Mohegan Sun Arena in Uncasville on Friday, November 18th at 7:30pm with Brett Eldredge and special guest Maren Morris.
Tickets are $95.00 & $75.00 and go on sale Friday, March 11th at 10:00am through Ticketmaster.  Ticketmaster customers may log on to ticketmaster.com or call Ticketmaster’s national toll free Charge By Phone number 1.800.745.3000.  Tickets will also be available at the Mohegan Sun Box Office starting Saturday, March 12th, subject to availability.
“I’m seriously chomping at the bit to kick off this tour,” said Urban.  “We’ll be playing a lot of new music from ripCORD, all new production, new cities where we’ve never played…and Brett Eldredge and Maren Morris? It’s gonna be potent and unbridled!”
Brett Eldredge’s current single, “Drunk On Your Love” is the second single from his recently released sophomore album, Illinois. The album debuted at #1 on the Billboard Country Albums Chart and #3 on the Billboard top 200 Chart and has already produced the #1 single “Lose My Mind.” The 2014 CMA New Artist of the Year co-wrote and co-produced every song on the 12 set disc, which follows on the heels of his 2013 debut album Bring You Back.
Twenty-five year-old Columbia Nashville singer/songwriter Maren Morris has quickly established herself in Nashville’s music community with songwriting and vocal stylings that reflect her Country, Folk and Pop influences, with Rolling Stone Country touting her “a stellar solo artist in her own right.”  Songs from her self-titled EP have been critically received and just two weeks after its release surpassed 5.5 million streams, with 3 songs hitting Spotify’s US and Global “Viral 50” chart, zipping to #1 on Billboard’s Heat Seeker Album Chart. Her first single, “My Church,” has been released to Country radio and is already in the Top 15.
Urban’s ‘ripCORD World Tour 2016’ takes place on the heels of his soon to be released eighth studio album release of the same name, which has already produced two singles – his Grammy nominated, #1 song, “John Cougar, John Deere, John 3:16” and its second single “Break On Me,” which just became Urban’s 20th #1 song. The album will be the follow-up to Urban’s groundbreaking release FUSE, his fourth #1 album, marking the first time in history that a male Country artist had debuted atop the all-genre charts in the U.S., Canada and Australia.
Mohegan Sun Arena is now ranked consistently among the top venues in the world according to Billboard Magazine, Pollstar and Venues Today. It has won “Casino of The Year” at the Country Music Awards in 2008 & 2010 and in 2013, was voted “Arena Of The Year” at the G2E Global Gaming Conference in Las Vegas. Also in 2013, Mohegan Sun won “Casino of The Year” in 2 categories at the Academy of Country Music Awards. Mohegan Sun Arena was also ranked among the top 10 arena venues in the nation for 2014, regardless of size. In 2015, Mohegan Sun took home the IEBA award for “Casino of the Year.” For more information on concerts and other great events, visit Mohegan Sun. For information on this week’s schedule, call the Entertainment and Special Events hotline at 1.888.226.7711, ext. 27163.