Performing live in the Arena on July 21st 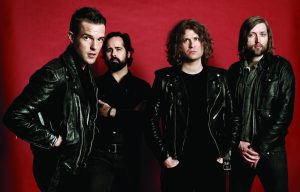 UNCASVILLE, CT (April 4, 2016) – The Killers are hitting the road this summer for a U.S. tour and will be making their way back to Connecticut for a live performance in Mohegan Sun Arena on Thursday, July 21st at 8:00pm.
Tickets are $70.00 & $54.50 and go on sale Friday, April 8th at 10:00am through Ticketmaster.  Ticketmaster customers may log on to ticketmaster.com or call Ticketmaster’s national toll free Charge By Phone number 1.800.745.3000.  Tickets will also be available at the Mohegan Sun Box Office starting Saturday, April 9th, subject to availability.
Las Vegas-based Rockers The Killers, featuring singer/keyboardist Brandon Flowers, drummer Ronnie Vanucci, guitarist Dave Keuning and bassist Mark Stoermer, formed in 2003. Their first album, Hot Fuss, was released the following year to worldwide acclaim. The album contained hit singles “Mr. Brightside” and “Somebody Told Me,” in addition to the anthemic tune “All These Things That I’ve Done,” which has since been referenced by the likes of U2 and Coldplay. After a decade of making music, in November 2013, The Killers released a “Best Of” collection, Direct Hits, which featured two incredible new songs alongside classics from the band’s revered catalogue.
Mohegan Sun Arena is now ranked consistently among the top venues in the world according to Billboard Magazine, Pollstar and Venues Today. It has won “Casino of The Year” at the Country Music Awards in 2008 & 2010 and in 2013, was voted “Arena Of The Year” at the G2E Global Gaming Conference in Las Vegas. Also in 2013, Mohegan Sun won “Casino of The Year” in 2 categories at the Academy of Country Music Awards. Mohegan Sun Arena was also ranked among the top 10 arena venues in the nation for 2014, regardless of size. In 2015, Mohegan Sun took home the IEBA award for “Casino of the Year.” For more information on concerts and other great events, visit Mohegan Sun. For information on this week’s schedule, call the Entertainment and Special Events hotline at 1.888.226.7711, ext. 27163.