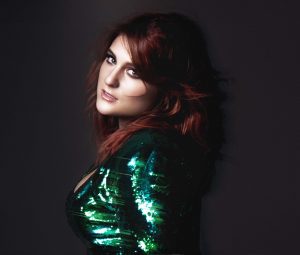 UNCASVILLE, CT (April 20, 2016) – This morning, Grammy Award-winning Best New Artist Meghan Trainor returned to The Ellen DeGeneres Show in order to personally announce her 2016 summer headline tour: The Untouchable Tour, which will stop by Mohegan Sun Arena on Thursday, September 22nd at 7:00pm.
Tickets are $59.00 & $39.00 and go on sale Friday, April 29th at 10:00am through Ticketmaster.  Ticketmaster customers may log on to ticketmaster.com or call Ticketmaster’s national toll free Charge By Phone number 1.800.745.3000.  Tickets will also be available at the Mohegan Sun Box Office starting Saturday, April 30th, subject to availability.
Following the announcement, she delivered a high-energy performance of the new chart-smashing single “NO” from her second full-length album, Thank You (Epic Records), out Friday, May 13th. The upcoming tour, promoted by Live Nation, will be the Grammy Award-winning multi-platinum Pop superstar’s biggest and most ambitious tour yet.  Kicking off on Thursday, July 14th at PNE Amphitheatre in Vancouver, British Columbia, the tour will travel to 26 cities throughout North America with dates lined up in New York City, Toronto, Los Angeles, Seattle, Boston and more. Academy Award®-nominated actress and multiplatinum pop singer Hailee Steinfeld and Common Kings serves as direct support on all dates.
Fans who pre-order any version of the new album Thank You or stream the hit single “NO” on Amazon beginning 5:00pm on Wednesday, April 20th (today) through 11:59pm on Monday, April 25th will receive an exclusive pre-sale code for early access to tickets for The Untouchable Tour.  Starting Wednesday, April 27th at 10:00am, those who received a code will be able to purchase tickets until 11:59pm Thursday, April 28th. Citi® cardmembers will have access to pre-sale tickets beginning Monday, April 25th at 10:00am local time through Citi’s Private Pass® Program. For complete pre-sale details, visit www.citiprivatepass.com.
“NO” has exploded into one of her biggest anthems yet. In less than a month, it received an RIAA Gold certification for sales exceeding 500,000 downloads, and it’s swiftly nearing platinum status. In addition to remaining Top 5 on iTunes Overall Top Songs Chart since release, “NO” reached #1 on Billboard’s Digital Songs Chart and #3 on the Hot 100—marking her fourth top 10 hit on that particular chart.   The video for “NO” has been viewed over 68 million times and counting: https://youtu.be/cMTAUr3Nm6I.
Meghan Trainor continues to break records, make history, inspire countless fans and change the landscape of Pop music and culture. She began 2016 by winning “Best New Artist” at the Grammy Awards and “Favorite Album” for her chart-dominating RIAA platinum full-length debut, Title (Epic Records), at the 2016 People’s Choice Awards. Last year, Title not only bowed at #1 on the Billboard Top 200, but it became the first #1 full-length debut from a female solo artist in five years. It stood out as one of only seven albums to sell over a million copies in 2015. It also yielded four inescapable multi-platinum Top 10 Billboard Hot 100 smashes – “All About That Bass” (9x-platinum), “Lips Are Movin” (4x-platinum), “Dear Future Husband” (2x-platinum) and “Like I’m Gonna Lose You” (featuring John Legend) (2x-platinum). Title was the #5 most streamed album globally in 2015 and currently has over 900 million streams worldwide. Meghan also has over 2 billion video views on VEVO.
Mohegan Sun Arena is now ranked consistently among the top venues in the world according to Billboard Magazine, Pollstar and Venues Today. It has won “Casino of The Year” at the Country Music Awards in 2008 & 2010 and in 2013, was voted “Arena Of The Year” at the G2E Global Gaming Conference in Las Vegas.  Mohegan Sun Arena was also ranked among the top 10 arena venues in the nation for 2014, regardless of size. In 2015, Mohegan Sun took home the IEBA award for “Casino of the Year.”  Mohegan Sun also won “Casino of the Year” in 2 categories at the 2013 & 2016 Academy of Country Music Awards. For more information on concerts and other great events, visit Mohegan Sun. For information on this week’s schedule, call the Entertainment and Special Events hotline at 1.888.226.7711, ext. 27163.