Live in the Arena on Wednesday, August 10th
UNCASVILLE, CT (April 25, 2016) – Selling 4 million tickets worldwide and described by The Times as “The Gold Standard” and 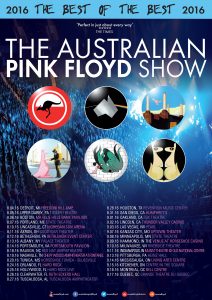 The Daily Mirror as “The Kings of the Genre”, The Australian Pink Floyd Show will be returning to Mohegan Sun for a performance in the Arena on Wednesday, August 10th at 7:30pm.
Tickets are $39.50 & $29.50 and go on sale Friday, April 29th at 10:00am through Ticketmaster.  Ticketmaster customers may log on to ticketmaster.com or call Ticketmaster’s national toll free Charge By Phone number 1.800.745.3000.  Tickets will also be available at the Mohegan Sun Box Office starting Saturday, April 30th, subject to availability.
Performing the music of Pink Floyd with note for note perfection, this critically acclaimed tribute show has been astonishing audiences worldwide. Striving to reproduce the Pink Floyd experience and bring the music to new audiences, the show continues to include a stunning light and laser show, video animations, state of the art high resolution LED screen technology and other special effects. To accompany these visuals are several large inflatables including a giant pig and their own distinct Pink Kangaroo.
They have also worked with musicians like Guy Pratt, Durga McBroom and her sister Lorelei McBroom who have toured with Pink Floyd, as well as sound engineer Colin Norfield who worked with Pink Floyd during their ‘Division Bell’ tour and on David Gilmour’s solo tours.
Often described as being more than a tribute band, The Australian Pink Floyd Show is the first Pink Floyd tribute show that took the concept out of the pubs and onto the worldwide arena circuit. The band has played to sell out audiences throughout Europe, UK, America, Canada, South America, Israel and Russia.
Mohegan Sun Arena is now ranked consistently among the top venues in the world according to Billboard Magazine, Pollstar and Venues Today. It has won “Casino of The Year” at the Country Music Awards in 2008 & 2010 and in 2013, was voted “Arena Of The Year” at the G2E Global Gaming Conference in Las Vegas.  Mohegan Sun Arena was also ranked among the top 10 arena venues in the nation for 2014, regardless of size. In 2015, Mohegan Sun took home the IEBA award for “Casino of the Year.”  Mohegan Sun also won “Casino of the Year” in 2 categories at the 2013 & 2016 Academy of Country Music Awards. For more information on concerts and other great events, visit Mohegan Sun. For information on this week’s schedule, call the Entertainment and Special Events hotline at 1.888.226.7711, ext. 27163.