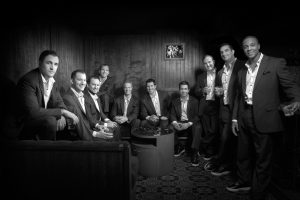 “I’ll Have Another…World Tour.” The North American leg – which celebrates the 20th anniversary of the a cappella group’s formation in 1996 and first show at Indiana University – begins October 14th at Reno, NV’s Grand Theatre and will be swinging through Connecticut for a live performance in Mohegan Sun Arena on Friday, December 2nd at 7:30pm.
Tickets are $30.00 and go on sale Friday, May 6th at 10:00am through Ticketmaster.  Ticketmaster customers may log on to ticketmaster.com or call Ticketmaster’s national toll free Charge By Phone number 1.800.745.3000.  Tickets will also be available at the Mohegan Sun Box Office starting Saturday, May 7th, subject to availability.
The “I’ll Have Another…World Tour” follows Straight No Chaser’s most recent release, 2015’s THE NEW OLD FASHIONED. The album sees the renowned group bringing their unique touch and inimitable vocal style to a stunning range of contemporary standards spanning The Weeknd’s “Can’t Feel My Face” and Hozier’s “Take Me To Church” to Radiohead’s “Creep” and Bob Dylan’s tender “Make You Feel My Love.” THE NEW OLD FASHIONED further features a number of Straight No Chaser’s incomparable medleys, including “Beggin’/Counting Stars” (blending favorites from Frankie Valli & the Four Seasons and One Republic) and “On The Road Again/I Play The Road” (originally by Willie Nelson and Zac Brown Band, respectively).
Mohegan Sun Arena is now ranked consistently among the top venues in the world according to Billboard Magazine, Pollstar and Venues Today. It has won “Casino of The Year” at the Country Music Awards in 2008 & 2010 and in 2013, was voted “Arena Of The Year” at the G2E Global Gaming Conference in Las Vegas.  Mohegan Sun Arena was also ranked among the top 10 arena venues in the nation for 2014, regardless of size. In 2015, Mohegan Sun took home the IEBA award for “Casino of the Year.”  Mohegan Sun also won “Casino of the Year” in 2 categories at the 2013 & 2016 Academy of Country Music Awards. For more information on concerts and other great events, visit Mohegan Sun. For information on this week’s schedule, call the Entertainment and Special Events hotline at 1.888.226.7711, ext. 27163.