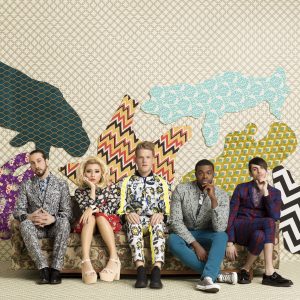 UNCASVILLE, CT (May 12, 2016) – Grammy Award winning and platinum selling recording artist Pentatonix has announced additional North American dates to their 2016 Pentatonix World Tour.  Special guests Us The Duo will continue on the road with the quintet. The 22 city 2nd leg of the U.S. tour will begin on October 17th in San Jose, CA and will be stopping by Mohegan Sun Arena for a live performance on Saturday, November 12th at 8:00pm.  The group will continue touring in support of their self-titled gold certified album and their newest single, “If I Ever Fall In Love” ft. Jason Derulo.
Tickets are $59.00 & $39.00 and go on sale Friday, May 20th at noon through Ticketmaster.  Ticketmaster customers may log on to ticketmaster.com or call Ticketmaster’s national toll free Charge By Phone number 1.800.745.3000.  Tickets will also be available at the Mohegan Sun Box Office starting Saturday, May 21st, subject to availability.
Since bursting onto the scene in 2011, multi-platinum selling recording artists Pentatonix have sold more than 3.2 million albums in the U.S. alone, won 2 Grammy Awards, sold out venues worldwide, have amassed over 1.5 billion views on their YouTube channel with over 10.5 million subscribers and appeared in the feature film Pitch Perfect 2.  Their latest release, Pentatonix debuted at #1 on the Billboard Top 200 and Current Albums chart and is certified gold by the RIAA.  The first single, “Can’t Sleep Love” has over 18 million views on YouTube.  The group’s holiday album, That’s Christmas To Me, is certified double platinum by the RIAA and features their recent 2016 Grammy winning track, “Dance of the Sugarplum Fairy.”
All 7 of their releases have peaked within the Top 5 on Billboard’s Digital Albums chart with 6 of those releases reaching the Top 10 or higher on the Billboard Top 200 Album chart. Most recently, the group received 2 gold certifications for their “Daft Punk” medley and cover of Imagine Dragons’ “Radioactive” ft. Lindsey Stirling. That’s Christmas To Me was the 4th best-selling album of 2014. The group released their very first documentary (On My Way Home) which follows the quintet on their sold out 2015 North American Tour featuring behind-the-scenes footage, life performance and the making of their debut studio album, Pentatonix.
Us The Duo has amassed a fan base of over 10 million followers since launching their groundbreaking #6SecondCovers online. After becoming the first artists signed to a major label from Vine, the couple released their 2014 album No Matter Where You Are, appeared on major national TV programs such as Good Morning America and Today, and even joined Oprah Winfrey’s “The Life You Want Weekend” tour. Two years later, the duo has just announced their new independent album Just Love, which is out on July 22nd.
Mohegan Sun Arena is now ranked consistently among the top venues in the world according to Billboard Magazine, Pollstar and Venues Today. It has won “Casino of The Year” at the Country Music Awards in 2008 & 2010 and in 2013, was voted “Arena Of The Year” at the G2E Global Gaming Conference in Las Vegas.  Mohegan Sun Arena was also ranked among the top 10 arena venues in the nation for 2014, regardless of size. In 2015, Mohegan Sun took home the IEBA award for “Casino of the Year.”  Mohegan Sun also won “Casino of the Year” in 2 categories at the 2013 & 2016 Academy of Country Music Awards. For more information on concerts and other great events, visit Mohegan Sun. For information on this week’s schedule, call the Entertainment and Special Events hotline at 1.888.226.7711, ext. 27163.