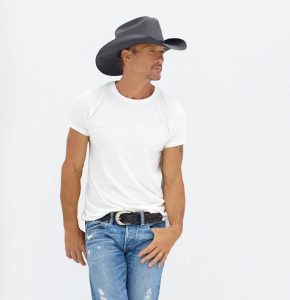 ward winner Tim McGraw is hitting the road this fall and will be swinging through Uncasville for a special live performance in Mohegan Sun Arena on Saturday, October 1st at 7:30pm.
Tickets are $149.00, $99.00, $79.00 & $59.00 and go on sale Thursday, May 26th at 10:00am through Ticketmaster.  Ticketmaster customers may log on to ticketmaster.com or call Ticketmaster’s national toll free Charge By Phone number 1.800.745.3000.  Tickets will also be available at the Mohegan Sun Box Office starting Friday, May 27th, subject to availability.
Tim McGraw has sold more than 40 million records worldwide and dominated the charts with 36 #1 singles.  He’s won 16 Academy of Country Music Awards, 14 Country Music Association Awards, 10 American Music Awards, 3 People’s Choice Awards and numerous other honors. His iconic career achievements include being named the BDS Radio’s “Most Played Artist of the Decade” for all music genres and having the “Most Played Song of the Decade” for all music genres with “Something Like That.”  He is the most played Country artist since his debut in 1992, with two singles spending over 10 weeks at #1 (“Live Like You Were Dying” and “Over and Over”). His current multi-week #1 single “Humble and Kind,” off his DAMN COUNTRY MUSIC album is his 59th release to hit Top 10 or better. His critically acclaimed acting skills were highlighted in the award-winning movies Friday Night Lights and The Blind Side. Tim will also be appearing in the movie The Shack this fall.
Mohegan Sun Arena is now ranked consistently among the top venues in the world according to Billboard Magazine, Pollstar and Venues Today. It has won “Casino of The Year” at the Country Music Awards in 2008 & 2010 and in 2013, was voted “Arena Of The Year” at the G2E Global Gaming Conference in Las Vegas.  Mohegan Sun Arena was also ranked among the top 10 arena venues in the nation for 2014, regardless of size. In 2015, Mohegan Sun took home the IEBA award for “Casino of the Year.”  Mohegan Sun also won “Casino of the Year” in 2 categories at the 2013 & 2016 Academy of Country Music Awards. For more information on concerts and other great events, visit Mohegan Sun. For information on this week’s schedule, call the Entertainment and Special Events hotline at 1.888.226.7711, ext. 27163.