Rockers will be live in Mohegan Sun Arena on October 13th 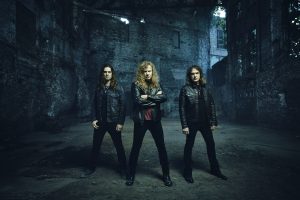 UNCASVILLE, CT (July 20, 2016) – Global Metal pioneers Megadeth have announced fall dates for the North American leg of their Dystopia World Tour. The tour kicks off in Casper, WY on September 20th and will be swinging through Connecticut for a live performance at Mohegan Sun Arena on Thursday, October 13th at 6:00pm with special guests Amon Amarth, Suicidal Tendencies, Metal Church and Havok.
Tickets are $35.00 and go on sale Friday, July 29th at 10:00am through Ticketmaster.  Ticketmaster customers may log on to ticketmaster.com or call Ticketmaster’s national toll free Charge By Phone number 1.800.745.3000.  Tickets will also be available at the Mohegan Sun Box Office starting Saturday, July 30th, subject to availability.
Megadeth burst onto the scene thirty years ago, virtually inventing a genre with their debut album Killing Is My Business… And Business Is Good! (recently recognized by VH1 as the “Greatest Thrash Metal Debut Album of All Time”).  The band has sold more than 38 million albums worldwide, earning numerous accolades including 11 Grammy® nominations and scoring five consecutive platinum albums—including 1992’s two-million-selling Countdown to Extinction.
Mohegan Sun Arena is now ranked consistently among the top venues in the world according to Billboard Magazine, Pollstar and Venues Today. It has won “Casino of The Year” at the Country Music Awards in 2008 & 2010 and in 2013, was voted “Arena Of The Year” at the G2E Global Gaming Conference in Las Vegas.  Mohegan Sun Arena was also ranked among the top 10 arena venues in the nation for 2014, regardless of size. In 2015, Mohegan Sun took home the IEBA award for “Casino of the Year.”  Mohegan Sun also won “Casino of the Year” in 2 categories at the 2013 & 2016 Academy of Country Music Awards. For more information on concerts and other great events, visit Mohegan Sun. For information on this week’s schedule, call the Entertainment and Special Events hotline at 1.888.226.7711, ext. 27163.