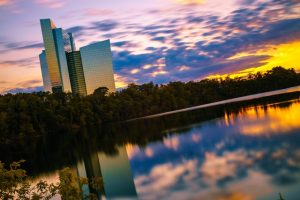 UNCASVILLE, CT (August 1, 2016) – Mohegan Sun, one of the largest, most spectacular entertainment, gaming, dining, shopping and convention destinations in the United States, is proud to announce they have been awarded eight 2016 Telly Awards. The Telly Awards are the premier awards honoring the finest in film and video productions, web commercials and local, regional and cable TV commercials and programs.

“It’s great recognition for the employees here who work hard on developing effective marketing strategies as well as a credit to our long-standing partner’s, Primal-NY and Taxi NY, who our teams work closely with on a daily basis. To win awards in TV and video production in today’s constantly changing world of communications, is really an achievement we can all be proud of,” said SVP of Marketing Communications for the Mohegan Tribal Gaming Authority, George Galinsky.
Additional awards for Film/Video category include:

The Annual Telly Awards showcase the best work of the most respected advertising agencies, production companies, television stations, cable operators and corporate video departments in the world. It is a widely known and highly respected national and international competition and receives over 12,000 entries annually from all 50 states and many foreign countries.
About Mohegan Sun:
Owned by the Mohegan Tribal Gaming Authority, Mohegan Sun is one of the largest, most spectacular entertainment, gaming, dining and shopping destinations in the United States.  Situated on 185 acres along the Thames River in scenic southeastern Connecticut, Mohegan Sun is home to three unique casinos, a 34-story, 1,200 room luxury hotel, a world-class spa and golf course, over 85 shops, restaurants and bars as well as three award-winning entertainment venues including a 10,000-seat Arena. Mohegan Sun is within easy access of New York, Boston, Hartford and Providence and located 15 minutes from the museums, antique shops and waterfront of Mystic Country. More information is available by calling 1.888.226.7711 or visiting mohegansun.com. Connect with us on facebook.com/mohegansun, follow us on twitter.com/mohegansun, Instagram @mohegansun, view us on youtube.com/mohegansunvideos and find us on Snapchat at username MoheganSun.