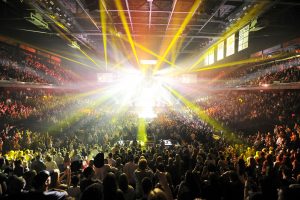 UNCASVILLE, CT (January 24, 2017) – National industry trade publications Pollstar Magazine, Billboard Magazine and Venues Today recently released their 2016 Year End Special issues, which reports the top selling tours and top venues across the globe, and all have ranked Mohegan Sun Arena among the top concert venues in the world. With one of the most successful years in its history, Mohegan Sun Arena drew over 700,000 people in 2016, making it the top casino venue in the world, as well as the 39th ranked concert stop worldwide and 17th nationally for all size venues.

Finishing in the top 3 for venues of its size nationwide according to Venues Today, the Arena places itself in the company of arenas like The Staples Center in Los Angeles, CA, Barclays Center in Brooklyn, Philips Arena in Atlanta, The Verizon Center in Washington, D.C. and Madison Square Garden in New York, NY, all of which have capacities of over 15,000. Mohegan Sun Arena also finishes #1 for all of New England in Pollstar’s 2016 ranks.

“When you consider most of the other major arenas are much larger than us, and that we ranked the highest of all casino venues, that is quite an achievement and a testament to the best team in the world, who run a world-class entertainment program,” said Tom Cantone, Sr.Vice President of Sports & Entertainment at Mohegan Sun.

The 2017 calendar is starting to heat up with 80% of the concerts currently on sale already sold-out. Artists scheduled to perform this year include Miranda Lambert on February 4th, Ariana Grande on February 17th, Sting on March 9th, Florida Georgia Line on March 10th & 11th, Bon Jovi on April 1st, Chris Rock on April 22nd, Eric Church on April 27th & 28th, The Weeknd on June 2nd, Neil Diamond on June 11th and New Kids On The Block on July 6th.  More information on these concerts and more can be found at Mohegan Sun!