Live in the Arena on July 23rd; Tickets go on sale February 3rd 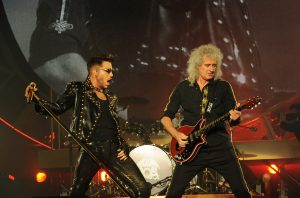 Tickets are $149.00, $99.00 and $79.00 and go on sale Friday, February 3rd at 10:00am through Ticketmaster. Ticketmaster customers may log on to ticketmaster.com or call Ticketmaster’s national toll free Charge By Phone number 1.800.745.3000.  Tickets will also be available at the Mohegan Sun Box Office beginning on Saturday, February 4th, subject to availability.

After wildly successful and sold out tours throughout Europe, Asia, Australia, Latin and North America, Brian May, Roger Taylor & Adam Lambert will debut a brand new show specially designed and created for this outing, bringing fans all their favorite Queen hits, like “Another One Bites the Dust,”  “Bohemian Rhapsody,” “We Will Rock You,” “We Are The Champions.”  The high-energy concert will bring their history alive in all its passion and glory, with stops in Los Angeles, New York, Chicago, Boston, Philadelphia and more, before wrapping on August 5 in Houston, TX at the Toyota Center.  The tour is presented by Live Nation.