Following massive European stadium showing, Depeche Mode will continue this fall with 28 shows in the U.S. and Canada 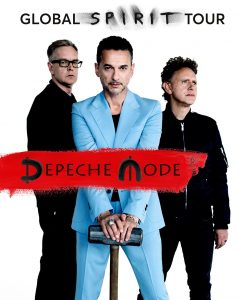 Tour, with the second leg bringing their stunning live show to fans across North America this fall. Following an extensive European summer tour, the 28-show North American run, exclusively promoted by Live Nation, will be live in Mohegan Sun Arena on Friday, September 1st at 7:30pm.

Tickets are $129.00, $99.00 and $79.00 and go on sale Friday, March 10th at 10:00am through Ticketmaster. Ticketmaster customers may log on to ticketmaster.com or call Ticketmaster’s national toll free Charge By Phone number 1.800.745.3000.  Tickets will also be available at the Mohegan Sun Box Office beginning on Saturday, March 11th, subject to availability.

The European stadium leg of the Global Spirit Tour, running May through July, has already sold over 1.5 million tickets and has sold-out shows across Europe – just the start of what is poised to be a record-breaking global tour. The Global Spirit Tour will later bring the band to Latin America, with details to be announced shortly.

The Global Spirit Tour is in support of the band’s upcoming 14th studio album, Spirit, out on March 17th via Columbia Records.  The album’s powerful and timely first single, “Where’s The Revolution,” has already been well-received by critics and fans alike, lauded as a strong “return to form” for Depeche Mode. Spirit has already garnered critical acclaim in early previews, with Q Magazine calling it “the most energized Depeche Mode album in years.”