Hilarious comedian to perform in the Arena on August 26th & 27th 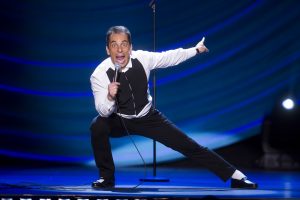 UNCASVILLE, CT (March 20, 2017) – Just for Laughs’ “Stand Up Comedian of the Year (2016)” Sebastian Maniscalco continues spreading his laughs across the U.S. on his Why Would You Do That? Tour.  The tour will be live at Mohegan Sun Arena on Saturday, August 26th and Sunday, August 27th.  Both shows will begin at 7:30pm.

Tickets are $149.00, $99.00, $79.00 and $59.00 and go on sale Friday, March 24th at 10:00am through Ticketmaster. Ticketmaster customers may log on to ticketmaster.com or call Ticketmaster’s national toll free Charge By Phone number 1.800.745.3000.  Tickets will also be available at the Mohegan Sun Box Office beginning on Saturday, March 25th, subject to availability.
Maniscalco is one of comedy’s fastest rising new stars. Born and raised in a working-class Chicago neighborhood, he moved to Los Angeles in 1998 to pursue his comedy career. There, he employed the work ethic his father instilled in him to build his name – simultaneously working as a waiter at the Four Seasons Hotel – and eventually drew the attention of actor Vince Vaughn, who cast him in Vince Vaughn’s Wild West Comedy Show. Maniscalco also stars in his own wildly popular The Pete and Sebastian Show podcast every Friday night. Maniscalco can be seen in the 2016 season of Jerry Seinfeld’s Comedians In Cars Getting Coffee as well as in the upcoming feature films The House, starring Will Ferrell and Amy Poehler; Cruise, directed by Rob Siegel and produced by Jeremy Renner; and the animated feature Nut Job 2.