Comedian Performs Live in the Arena on Friday, July 21st 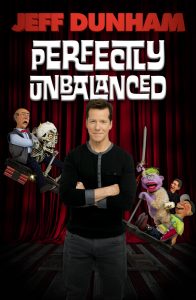 UNCASVILLE, CT (April 10, 2017) – Internationally acclaimed ventriloquist Jeff Dunham and his troupe of characters are returning to Connecticut for a one-night only engagement at Mohegan Sun Arena on Friday, July 21st at 8:00pm.

Tickets are $60.00 & $50.00 and go on sale Friday, April 14th at 10:00am through Ticketmaster.  Ticketmaster customers may log on to ticketmaster.com or call Ticketmaster’s national toll free Charge By Phone number 1.800.745.3000.  Tickets will also be available at the Mohegan Sun Box Office starting Saturday, April 15th, subject to availability.

A regular on Forbes’ Celebrity 100 list of most powerful entertainers, Dunham has built a comedy empire over years of constant touring and innovation. Using colorful characters like Walter the Grumpy Retiree, Achmed the Dead Terrorist, redneck Bubba J, Peanut and Jose Jalapeno, Dunham has carved a unique corner in the comedy world that’s as funny as it is popular. He has set the record for viewership on Comedy Central, sold more than 7 million DVDs worldwide and nearly a billion views on YouTube.