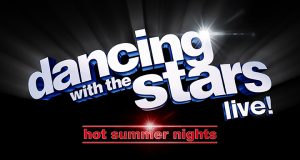 Sharna Burgess, Artem Chigvintsev, Sasha Farber, Keo Motsepe, Gleb Savchenko, Emma Slater, and More!
UNCASVILLE, CT (May 1, 2017) – Following the success of the sold out “Dancing with the Stars: Live! – We Came to Dance” tour this winter, TV’s hottest show is going back on tour across America this summer in “Dancing with the Stars: Live! – Hot Summer Nights.” Fans of the show have the opportunity to see the best ballroom dancers in the business perform live in Uncasville, CT This all-new production showcases every type of ballroom and modern dance seen on ABC’s hit show produced by BBC Worldwide Productions, Dancing with the Stars, including sizzling group numbers, steamy duets and over the top original pieces choreographed and creative directed by four-time Emmy nominee Mandy Moore. “Dancing with the Stars: Live! – Hot Summer Nights” travels to Mohegan Sun Arena on Friday, June 30th and Saturday, July 1st.  Both shows will begin at 8:00pm.
Tickets are $45.00 and are on sale now through Ticketmaster. Ticketmaster customers may log on to ticketmaster.com or call Ticketmaster’s national toll free Charge By Phone number 1.800.745.3000.  Tickets will also be available at the Mohegan Sun Box Office beginning on Tuesday, May 2nd, subject to availability.
Captivating audiences across the country, “Dancing with the Stars: Live! – Hot Summer Nights” features the hottest cast in dance, including Lindsay Arnold, Sharna Burgess, Artem Chigvintsev, Sasha Farber, Keo Motsepe, Gleb Savchenko, Emma Slater, Alan Bersten, Hayley Erbert and Britt Stewart, with more surprise casting to be announced. Audiences will have the opportunity to experience the professional dancing, exquisite costumes and excitement they see in the ballroom every Monday night live in theaters across America.
Mohegan Sun Arena is now ranked consistently among the top venues in the world according to Billboard Magazine, Pollstar and Venues Today. It has won “Casino of The Year” at the Country Music Awards in 2008 & 2010 and in 2013, was voted “Arena Of The Year” at the G2E Global Gaming Conference in Las Vegas.  Mohegan Sun Arena was also ranked among the top 10 arena venues in the nation for 2014, regardless of size. In 2015, Mohegan Sun took home the IEBA award for “Casino of the Year.”  Mohegan Sun also won “Casino of the Year” in 2 categories at the 2013 & 2016 Academy of Country Music Awards. For more information on concerts and other great events, visit Mohegan Sun. For information on this week’s schedule, call the Entertainment and Special Events hotline at 1.888.226.7711, ext. 27163.