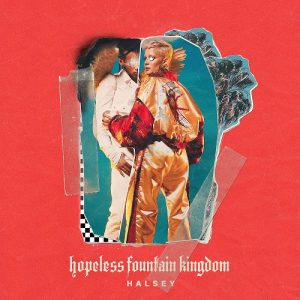 UNCASVILLE, CT (May 3, 2017) – Halsey announces her 2017 North American headline tour in support of her second full-length album, hopeless fountain kingdom [Astralwerks]—out June 2nd.  She will be performing live at Mohegan Sun Arena on Friday, September 29th at 7:30pm.
Tickets are $55.00 and $40.00 and go on sale Friday, May 12th at 10:00am through Ticketmaster. Ticketmaster customers may log on to ticketmaster.com or call Ticketmaster’s national toll free Charge By Phone number 1.800.745.3000.  Tickets will also be available at the Mohegan Sun Box Office beginning on Saturday, May 13th, subject to availability.
Halsey first stormed the pop culture kingdom in 2015 and took her spot on the throne as her full-length debut BADLANDS crash-landed at #2 on the Billboard Top 200 and earned a platinum-certification in under a year. She sold out arenas everywhere and garnered a 2017 Grammy® nomination in the category of “Best Pop Duo/Group Performance” for “Closer,” her seven times platinum megahit with The Chainsmokers.  Her reign continues with hopeless fountain kingdom.
Mohegan Sun Arena is now ranked consistently among the top venues in the world according to Billboard Magazine, Pollstar and Venues Today. It has won “Casino of The Year” at the Country Music Awards in 2008 & 2010 and in 2013, was voted “Arena Of The Year” at the G2E Global Gaming Conference in Las Vegas.  Mohegan Sun Arena was also ranked among the top 10 arena venues in the nation for 2014, regardless of size. In 2015, Mohegan Sun took home the IEBA award for “Casino of the Year.”  Mohegan Sun also won “Casino of the Year” in 2 categories at the 2013 & 2016 Academy of Country Music Awards. For more information on concerts and other great events, visit Mohegan Sun. For information on this week’s schedule, call the Entertainment and Special Events hotline at 1.888.226.7711, ext. 27163.