WHAT: After the sold-out Total Package Tour: New Kids On The Block with Paula Abdul and Boyz II Men concert inside Mohegan Sun Arena, the night continues with Boyz II Men official after party at VISTA Lounge! 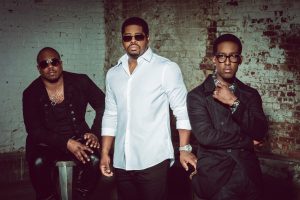 IN DETAIL: Party alongside one of the best R&B acts of all-time, Boyz II Men, on Thursday, July 6th at one of Mohegan Sun’s hottest nightclubs, VISTA Lounge at Wombi Rock. With over 64 million albums sold, the group continues to create timeless hits that appeal to fans across all generations. Join in on the fun for an unforgettable after party you won’t want to miss!

ABOUT MOHEGAN SUN:
Owned by the Mohegan Tribal Gaming Authority, Mohegan Sun is one of the largest, most spectacular entertainment, gaming, dining and shopping destinations in the United States.  Situated on 185 acres along the Thames River in scenic southeastern Connecticut, Mohegan Sun is home to three unique casinos, 1,600 deluxe hotel rooms, 2 world-class spas, a golf course, over 90 shops, restaurants and bars as well as three award-winning entertainment venues including a 10,000-seat Arena. Mohegan Sun is within easy access of New York, Boston, Hartford and Providence and located 15 minutes from the museums, antique shops and waterfront of Mystic Country. More information is available by calling 1.888.226.7711 or visiting mohegansun.com. Connect with us on Facebook, follow us on Twitter and Instagram @mohegansun, view us on YouTube and find us on Snapchat at username MoheganSun.