WHAT: Once again Mohegan Sun is teaming up with Mothers Against Drunk Driving, WCTY and the New London Day for MADD About Dan + Shay charity concert. 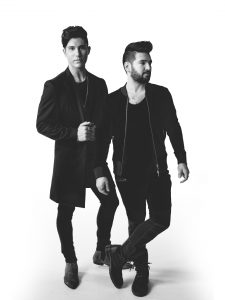 WHEN/ WHERE: Friday, September 22nd at 8:00pm
Wolf Den at Mohegan Sun

IN DETAIL: Taking over the Wolf Den, MADD About Dan + Shay will be the 9th year that Mohegan Sun is a proud partner of Mothers Against Drunk Driving for a benefit featuring a great night of fun and entertainment. Festivities will include a WCTY pre-party, meet & greet and a silent auction held at The Shops at Mohegan Sun. Longtime supporter and radio host, Shelly Martinez of WCTY-FM, will also be on-hand to give a special message before the concert. All proceeds benefit MADD.

Tickets are $100.00 and $50.00 and go on sale Friday, July 14th at 10:00am at the Mohegan Sun Box Office and through Ticketmaster.com. Ticketmaster customers can also call their national toll free Charge By Phone number, 1.800.745.3000. All ticket holders will also get access to the WCTY pre-party, taking place at The Cabaret Theatre at 6:00pm, with hors d’oeuvres, drinks and live entertainment!
Admission to the Wolf Den will begin at 7:00pm. Guests will also have the opportunity to participate in a special silent auction, taking place at The Shops at Mohegan Sun from 5:00pm to 10:00pm.

About Dan + Shay:
Dan + Shay’s sophomore album Obsessed debuted last year and follows their 2014 Where It All Began, which made them the first new Country duo in SoundScan recorded history to debut at #1 on Billboard’s Country Albums Chart. The album included the debut single, “19 You + Me” which earned RIAA Platinum certification, and their first #1 single, “Nothin’ Like You,” which earned RIAA Gold certification. Racking up more than 60 million YouTube views, the pair has impressively sold more than 2.2 million digital tracks and more than 620,000 album equivalents to date, including 240 million streams. Their first single off Obsessed, “From The Ground Up” earned RIAA Gold certification and marked their second to hit the top of the charts. They have earned three consecutive nominations for both ACM “Vocal Duo of the Year” and CMA’s “Vocal Duo of the Year” award as well as nods for an American Country Count-down Awards, CMT Awards, and Radio Disney Music Awards. Dan + Shay are currently on the road headlining their 2016-2017 Obsessed Tour.

About MADD:
The mission of Mothers Against Drunk Driving is to stop drunk driving, to support the victims of this violent crime and to prevent underage drinking. MADD Connecticut is committed to clearly and powerfully advocating for victims of alcohol-related crashes.  MADD delivers quality services to hundreds of families each year at no cost to them, as well as help victims/survivors through the multitude of emotions and criminal proceedings that take place through court accompaniment and by providing grief counseling and support groups.  MADD’s goal is to eliminate drunk driving and educate Connecticut youth about underage drinking. MADD introduces and follows legislation concerning bills to strengthen drunk driving laws.