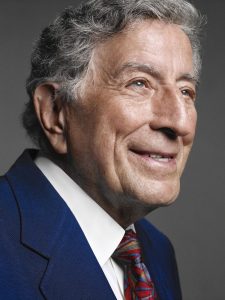 UNCASVILLE, CT (July 12, 2017) – Mohegan Sun presents Tony Bennett, the 19-time Grammy award-winning musician whose music spans over six decades on Saturday, September 30th at Mohegan Sun Arena. Adding to the performance, Tony’s daughter Antonia Bennett has been touring with her father and will open the performance with a collection of Jazz and Pop standards.

Tickets are $60.00 and $40.00 and go on sale Friday, July 14th at 10:00am through Ticketmaster. Ticketmaster customers may log on to Ticketmaster.com or call Ticketmaster’s national toll free Charge By Phone number 1.800.745.3000.  Tickets will also be available at the Mohegan Sun Box Office beginning on Saturday, July 15th, subject to availability.

With worldwide record sales in the millions, and dozens of platinum and gold albums to his credit, Tony Bennett is a musician who touches the hearts and souls of audiences with his legendary vocals and charming stage presence. His long list of achievements, spanning over 60 years, includes 19 Grammy awards, including the prestigious “Grammy Lifetime Achievement Award,” making this artist a true international treasure. His signature tunes such as “Steppin’ Out With My Baby” and “I Left My Heart In San Francisco” form part of the fabric of American music culture. Often billed as the world’s most boyish octogenarian, Bennett is a vital musical artist at the peak of his powers.

Celebrating his 90th birthday in August of 2016, the milestone was marked by the presentation of Tony Bennett Celebrates 90: The Best is Yet To Come, a two-hour prime time special that aired in December while a companion CD of the same name was released simultaneously. Last fall also saw the release of Bennett’s fifth book, Just Getting Started, which he co-authored with journalist Scott Simon. Bennett’s 85th birthday in 2011 marked the release of Duets II and made music history by making Tony the oldest artist to ever have a #1 CD on the Billboard Album Charts.  Duets II followed up Tony Bennett Duets: An American Classic CD, released in 2006.

2012 marked the 50th anniversary of the singer’s signature song “I Left My Heart in San Francisco,” as well as the release of a new documentary film, The Zen Of Bennett, created and conceived by Tony’s son and manager Danny Bennett. Bennett also authored his fourth book Life Is A Gift released in 2012 and entered the NY Times Best Seller list. In 2014, Tony Bennett released a collaborative album with Lady Gaga, Cheek To Cheek, featuring these two legendary artists performing Jazz standards. The album debuted at #1 on the Billboard Album Charts making Bennett the oldest musical artist, at the age of 88, to have an album top the Billboard 200 and won the Grammy award in the “Best Traditional Pop Album” category.