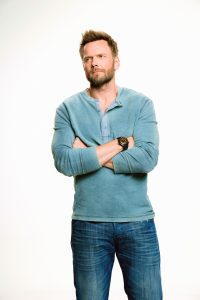 Tickets are $60.00, $50.00 and $40.00 and go on sale Friday, September 8th at 10:00am through Ticketmaster. Ticketmaster customers may log on to Ticketmaster.com or call Ticketmaster’s national toll free Charge By Phone number 1.800.745.3000.  Tickets will also be available at the Mohegan Sun Box Office beginning on Saturday, September 9th, subject to availability.

McHale is one of the most sought after comedians and actors in the industry and continues to perform his stand-up act around the country to sold-out audiences. McHale has been on shows such as the enormously popular celebrity news show E!’s The Soup in which he satirized Pop culture and current events. McHale is also best known for his starring role on the hit comedy series Community, which wrapped its sixth season on Yahoo after five seasons on NBC. Additionally, he was recently on Fox’s revival of X-File’s where he plays a conservative news anchor as well as CBS’ The Great Indoors.

Previously, McHale starred as Robin Williams’ son in A Merry Friggin’ Christmas and was seen in the Jerry Bruckheimer-produced supernatural thriller Deliver Us From Evil. He also appeared in the Warner Bros’ romantic comedy Blended alongside Adam Sandler and Drew Barrymore. McHale’s additional film credits include Seth MacFarlane’s comedy smash TED, What’s Your Number?, The Big Year, Spy Kids: All The Time in The World and The Informant.