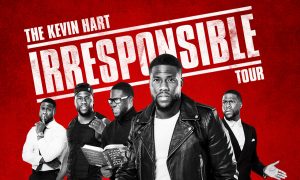 UNCASVILLE, CT (October 16, 2017) – Kevin Hart, one of the top comedians, entertainers, authors and businessmen in the industry today, is set to bring The Irresponsible Tour for a stand-up live performance on Saturday, December 30th at 8:00pm at Mohegan Sun Arena.

After an electrifying performance at amateur night in a Philadelphia comedy club, Kevin quit his shoe salesman job and began performing full time at venues such as The Boston Comedy Club, Carolines, Stand-Up NY, The Laugh Factory, and The Comedy Store in Los Angeles. However, it was his first appearance at the Montreal Just for Laughs Comedy Festival that led Kevin into roles in feature films.

2017 has already been a banner year for Hart, his memoir I Can’t Make This Up: Life Lessons debuted at #1 on the New York Times Bestseller list and has remained on the list for nine consecutive weeks.  The book also topped records on the Audible platform, selling over 100,000 copies in the first five weeks. Earlier in the year Hart voiced a title character in Captain Underpants: The First Epic Movie.  To close 2017, Kevin will appear in the Sony reboot of the classic film Jumanji alongside Dwayne Johnson and Jack Black. In March of 2018, Kevin will star alongside Bryan Cranston and Nicole Kidman in his first dramatic role in the Untouchables.  Hart will soon begin shooting the Feature Comedy Night School for Universal, a film in which he co-wrote under the Hartbeat production banner and will also star in.  The comedy follows a group of misfits who are forced to attend adult classes in the longshot chance they’ll pass the GED exam.

Hart’s newest business venture is his digital platform the LOL NETWORK – Laugh Out Loud, the comedy brand and multi-platform network founded by Hart in partnership with global content leader Lionsgate.  The streaming video service launched on August 3rd featuring a slate of original scripted and unscripted comedy series, stand-up specials, licensed programming, and live broadcasts.  The Laugh Out Loud service also features up and coming comedians curated by Hart through LOL showcases at events, including a partnership with the world’s top comedy festival “Just for Laughs.”

Hart embarked on the multi-city domestic and international WHAT NOW comedy tour. Domestically, he sold out 8 tristate area arenas, including Madison Square Garden, Barclays, Prudential Center and Jones Beach, selling over 100,000 tickets in the NY market. Internationally, he sold out over a dozen arenas in the European market, selling over 150,000 tickets, and sold out arenas across Australia, selling 100,000 tickets. Hart’s hit comedy tour grossed over $100 million worldwide. With his passion for stand-up and entertainment, Hart continues to tour the country to sold-out audiences.

In September, 2011 Hart released Laugh At My Pain the feature film version of his comedy tour (under the same name). The movie grossed over $7 million, and was 2011’s most successful film of those released in less than 300 theaters.  The LAMP tour was so successful, it catapulted Hart to 2011’s number one comedian on Ticketmaster, and in February, 2011, he sold out the Nokia Theater for two nights in a row, breaking the record previously set by Eddie Murphy. This lead to the LAMP DVD hitting double platinum in February 2012, after being on sale for only a month.