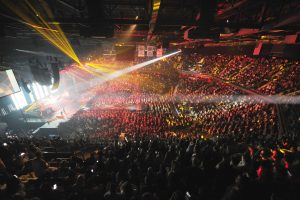 UNCASVILLE, CT (October 24, 2017) — Mohegan Sun, the Uncasville, CT. flagship property for Mohegan Gaming & Entertainment, is excited to announce that it has been named “Casino of the Year” at the 2017 International Entertainment Buyers Association (IEBA) Honors and Awards Ceremony, that took place in Nashville, Tennessee on October 17th, 2017.  Mohegan Sun won this very award in 2015 as well.

“Our dedicated entertainment team has built a national reputation to make our 10,000-seat Mohegan Sun Arena become as popular as the stars that play it. I’m very proud of the high level of entertainment and hard work that the industry has recognized as award-winning, and with that, extremely honored to be named “Casino of the Year,” at this year’s IEBA Ceremony.” – said Senior Corporate VP of Sports & Entertainment for Mohegan Gaming & Entertainment, Tom Cantone.

The International Entertainment Buyers Association Honors and Awards Ceremony took place October 17th in downtown Nashville’s, Omni Hotel and Country Music Hall of Fame® & Museum. The awards are voted on by top entertainment executives in the nation including the biggest agencies, artist management groups and other arenas, theatres and clubs throughout the U.S.
Mohegan Gaming & Entertainment (MGE), is the corporate arm of Mohegan Sun, with gaming & entertainment destinations across the United States and with projects underway internationally, as well. In addition to the flagship casino & resort in Connecticut, which is home to Mohegan Sun Arena and regularly hosts acts like Bruce Springsteen, Beyoncé, Kenny Chesney and Lady Gaga, MGE also supports entertainment venues at each of its owned and/or operated properties, including the 2,500-seat Mari Showroom at Paragon Hotel & Resort in Marksville, LA, the 1,400-seat Superstar Theatre at Resorts Casino Hotel in Atlantic City, the 1,400 Keystone Grand Center at Mohegan Sun Pocono in Wilkes-Barre, PA and a soon-to-be-opened, 2,500-seat entertainment venue at iLANI in southern Washington State.