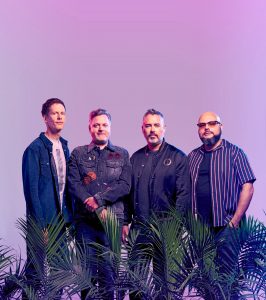 Tickets are $33.50 and go on sale Friday, November 17th at 10:00am through Ticketmaster. Ticketmaster customers may log on to Ticketmaster.com or call Ticketmaster’s national toll free Charge By Phone number 1.800.745.3000.  Tickets will also be available at the Mohegan Sun Box Office beginning on Saturday, November 18th, subject to availability.

“The Last Summer on Earth tour is something we all really look forward to,” states Ed Robertson. “From its inception, it’s been about putting together great live acts to give the audience a great night out. 2018 is going to be a blast because we’re touring with friends!  Kevin Griffin from Better Than Ezra has been a songwriting collaborator for almost a decade, and KT and I rocked together in Yukon Kornelius. This is going to be a great tour with lots of collaboration.”
Barenaked Ladies premiere their 15th studio album Fake Nudes today via Huffington Post. Fake Nudes builds off the band’s harmony-rich hybrid of Folk and Pop/Rock and pushes into more Eclectic sonic terrain marking the bands most dynamic record to date. Fake Nudes is available November 17th on Vanguard Records.