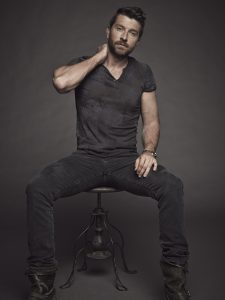 Tickets are $45.00, $35.00 and $25.00 and go on sale Friday, December 8th at 10:00am through Ticketmaster. Ticketmaster customers may log on to Ticketmaster.com or call Ticketmaster’s national toll free Charge By Phone number 1.800.745.3000.  Tickets will also be available at the Mohegan Sun Box Office beginning on Saturday, December 9th, subject to availability.

Shared Eldredge: “I have been very fortunate to be on some massive tours in my career, but my first major solo headlining tour is something I have wanted to give to my fans for a long time! I cannot wait!”

Fans can currently hear Eldredge on the airwaves, as “The Long Way” climbs into the Top 25 at Country radio – while simultaneously boasting nearly 25 million streams. People magazine noted “the bubbling synths on the slow-burning ballad” while Billboard declared that the single “…makes you wish he was singing to you.” The single comes from the singer / songwriter’s recently released self-titled record, which marked his second chart-topping Country album and hit #1 on the Top Album Sales Chart upon release.

Before hitting the road for his headlining dates, Eldredge will join Blake Shelton for the Country Music Freaks Tour beginning in February alongside Carly Pearce and Trace Adkins.

Live Nation is the official promoter for The Long Way Tour. Fans can purchase tickets beginning December 8th (except where noted) at 10:00am local time by visiting bretteldredge.com/tour.

ABOUT BRETT ELDREDGE:
Platinum-selling singer/songwriter Brett Eldredge recently released his brand new single “The Long Way” from his self-titled record, which was the best-selling album (all-genre) upon release and hit #1 on the Billboard Country Albums Chart and the Top Album Sales Chart. “The Long Way,” which he performed on both TODAY and The Tonight Show Starring Jimmy Fallon in August, follows Eldredge’s six chart-topping singles including his most recent, “Wanna Be That Song.” His sophomore album Illinois debuted at #1 on the Billboard Country Albums Chart and #3 on the Billboard Top 200 Chart upon its release, and it features the platinum-certified mega hit “Drunk On Your Love” and gold-certified “Lose My Mind.”

The Paris, IL native released his Christmas album Glow in October of last year, which earned him #1 song on the Holiday Music and Adult Contemporary charts with “Baby It’s Cold Outside,” a duet with Grammy-winner Meghan Trainor. Eldredge’s 2013 debut album Bring You Back spawned three chart-topping singles including the platinum-certified “Don’t Ya,” the gold-certified “Beat of the Music,” which was the most played Country song of 2014, and the gold-certified “Mean To Me.” For more information: Facebook // Twitter // Instagram // Spotify // Website.

ABOUT DEVIN DAWSON:
Since the release of Devin Dawson’s debut single “All On Me” earlier this year, the California-native has already made his TV debut on Late Night with Seth Meyers, landed his first Grand Ole Opry performance and most recently was named a 2018 Pandora “Country Artist to Watch.” He has already received critical praise from a multitude of outlets including Entertainment Tonight, ELLE, People, Entertainment Weekly, Rolling Stone, The Tennessean, HITS Magazine and more.

An atypical Country artist, Dawson’s approach to music is not different on purpose, it’s different with purpose. He grew up just outside the gates of Folsom Prison, drawing inspiration from Johnny Cash, Alan Jackson, Marvin Gaye and Creedence Clearwater Revival. Pulling from these influences, he began to write in a style that is definitively Country. Dawson’s lyrics full of romance and vulnerability, delivered with a distinctive saw-toothed vocal, draw you in from the first verse and keep you hooked until the very last chord. His unique mix of organic roots and high-voltage Country is showcased masterfully on his forthcoming debut Dark Horse, produced by the daring Jay Joyce (Eric Church, Little Big Town, Brothers Osborne). With a co-write credit on every track, the result will further establish Dawson’s building reputation as a dark horse set to emerge as one of the most exciting modern storytellers the format has ever seen.

ABOUT JILLIAN JAQUELINE:
Just three years after landing in Music City, Jillian recorded a five-song EP with Grammy-winning songwriter and producer Richard Marx behind the board; Marx produced the single titled “Overdue” (with Vince Gill on harmony vocals) less than twelve months later. Pushing the 2.5 million streaming mark, “Overdue” launched Jillian’s career into infinity orbit. She inked a publishing deal with Downtown Music Publishing and released her debut self-titled independent project in early 2016. Ranking as one of the Top 20 “Artists To Watch” in 2017, Jillian is also one of CMT’s “Next Women of Country” (Class of 2017).