Tour will hit 30+ cities across the U.S. with Mohegan Sun slated for April 6th 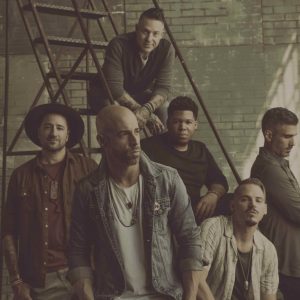 UNCASVILLE, CT (December 12, 2017) – Grammy-nominated Rock band Daughtry have announced details for the first leg of their 2018 headlining tour. Set to hit 30+ cities across the U.S., Daughtry’ s tour dates will kick off on March 7th in Fort Meyers, FL and will wrap on April 20th with singer Sinclair opening. The band will take the stage in Mohegan Sun Arena on Friday, April 6th at 7:30pm.

Tickets are $35.00 and go on sale Friday, December 15th at 10:00am through Ticketmaster. Ticketmaster customers may log on to Ticketmaster.com or call Ticketmaster’s national toll free Charge By Phone number 1.800.745.3000.  Tickets will also be available at the Mohegan Sun Box Office beginning on Saturday, December 16th, subject to availability.

In addition to the tour, Daughtry are also gearing up to announce new music that is set to come in 2018.

Chris Daughtry said, “We are very much looking forward to hitting the road again and reconnecting with our fans! We’ve been grinding away in the studio working diligently on our 5th album and cannot wait to share the new material in 2018! Our fans have waited long enough.”

Daughtry have released four studio albums, scored four #1 hits and garnered four Grammy nominations. Additionally, the band has sold over 8 million albums and 16 million singles, as well as selling out concerts around the globe. At radio, the band has also earned four #1 singles, including the multi-format hit #1 song “It’s Not Over.” Daughtry’ s self-titled album was the fastest-selling Rock debut in Soundscan history, and its follow-up, Leave This Town, marked the quintet’s second consecutive #1 album. The band’s third album, Break The Spell, was certified gold within four weeks of its release, and their last studio effort, Baptized, produced the certified gold single, “Waiting For Superman.”

ABOUT SINCLAIR
Sinclair is the sixth of nine children raised by a considerably strict pastor in upstate New York. With such a large family and rather stifling upbringing, music quickly became her everyday escape. After testing the waters in New York City and LA, Sinclair picked up in 2011 and chose Nashville as her home. It was there that she quickly honed her musical skills and dove into learning multiple instruments, while writing and recording her critically-acclaimed debut EP, Sweet Talk.

Produced by John Alagia (‪John Mayer) and Nolan Sipe (Andy Grammar), the EP featured a standout song, “This Too Shall Pass,” which has over 12 million streams on Spotify to date. Her follow-up EP, CLRBLND premiered in 2016 on TeenVogue.com and opened doors for her to perform alongside top acts such as: Ke$ha, ‪Claude Kelly & Chuck Harmony (Louis York), ‪Max Frost and ‪Mike Posner.

Sinclair prides herself on creating musical experiences that mirror life — dark and methodical tones, with uplifting bursts of colorful brightness and feel good energy. She lives in Nashville, Tennessee with her wife, a painter & stylist, and credits their marriage for her daily dose of inspiration and excitement.