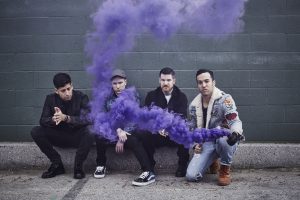 UNCASVILLE, CT (January 19, 2018) – After months of anticipation, multi-platinum selling, Grammy-nominated Chicago band Fall Out Boy release their seventh studio album M A  N   I    A today on Island Records/DCD2 Records. The album is available across all DSPs NOW. The band also released a new music video for the track “Church” directed by Daveion Thompson – watch HERE. Fall Out Boy will bring M A  N   I    A on the road to 25+ U.S. cities beginning August 29th in Uniondale, NY with special guest Machine Gun Kelly on all dates. Gym Class Heroes, Every Time I Die, Against The Current, State Champs, L.I.F.T., and nothing, nowhere will each join the tour on select dates to be announced. The tour is set to make a stop at Mohegan Sun Arena on Friday, August 31st at 7:00pm.

Tickets are $79.50, $69.50 and $39.50 and go on sale Friday, January 26th at 10:00am through Ticketmaster. Ticketmaster customers may log on to Ticketmaster.com or call Ticketmaster’s national toll free Charge By Phone number 1.800.745.3000.  Tickets will also be available at the Mohegan Sun Box Office beginning on Saturday, January 27th, subject to availability.

On September 8th, Fall Out Boy will return to their hometown for a special homecoming milestone – their first-ever headline show at Chicago’s iconic Wrigley Field. The band previously performed at Wrigley as MLB’s first-ever live musical performance on Opening Night in April 2015. Most recently, Fall Out Boy took over the 7th inning stretch and sang “Take Me Out To The Ballgame” on September 16, 2017 when the Cubs hosted the St. Louis Cardinals – a game at which Pete Wentz also had the honor of throwing the game’s ceremonial first pitch.

“I grew up going to games with my dad at Wrigley,” says Pete Wentz. “This stadium contains so much magic from being a kid…. I can’t think of somewhere closer to me to come home and play a show at in Chicago.”
The band celebrated the album’s release this week with performances on The Late Show with Stephen Colbert last night and Good Morning America this morning, along with an appearance on MTV’s TRL on Wednesday. They will perform on The Late Late Show with James Corden on January 31st.
For a complete list of tour dates, please visit falloutboy.com/tour.
Mohegan Sun Arena is now ranked consistently among the top venues in the world according to Billboard Magazine, Pollstar and Venues Today. It has won “Casino of The Year” at the Country Music Awards in 2008 & 2010 and in 2013, was voted “Arena Of The Year” at the G2E Global Gaming Conference in Las Vegas.  Mohegan Sun Arena was also ranked among the top 10 arena venues in the nation for 2014, regardless of size. In 2015, Mohegan Sun took home the IEBA award for “Casino of the Year.”  Mohegan Sun also won “Casino of the Year” in 2 categories at the 2013 & 2016 Academy of Country Music Awards. For more information on concerts and other great events, visit Mohegan Sun. For information on this week’s schedule, call the Entertainment and Special Events hotline at 1.888.226.7711, ext. 27163.