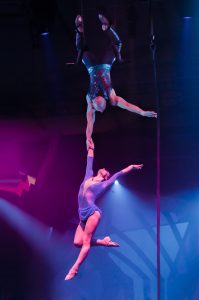 Tickets are $25.00 and go on sale Friday, February 2nd at 10:00am through Ticketmaster. Ticketmaster customers may log on to Ticketmaster.com or call Ticketmaster’s national toll free Charge By Phone number 1.800.745.3000.  Tickets will also be available at the Mohegan Sun Box Office beginning on Saturday, February 3rd, subject to availability.

This critically acclaimed 75-minute revue will reveal exquisite costumes, an alluring musical score and astonishing performance artistry from around the world.  “With stunts that appear to defy the laws of human physiology,” proclaimed Philly.com. “Cirque Dreams Revealed is hailed as “Dazzling” with “Athletic Prowess and Theatrical Flair,” by Atlantic City Weekly.

Under the artistic direction of founder and Broadway director Neil Goldberg, the Cirque Dreams franchise and global entertainment brand of popular shows throughout the world have garnered the praise of critics around the country from USA Today, Associated Press and the New York Times to CNN, Today Show and Fox & Friends, Neil Goldberg has been declared “One of today’s leading theatrical impresarios” by The LA Times. Chris Jones of The Chicago Tribune says Goldberg’s Cirque Dreams has “mastered an art form that the more famous French Canadians have yet to conquer.” The New York Daily News hails, “There have only been a handful of shows that have generated an exclamation point as assertive as the ones created and directed by Neil Goldberg,” proclaiming him “uniquely ingenious.”