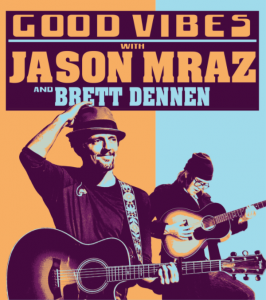 Tickets are $59.00, $49.00 and $39.00 and go on sale Friday, February 16th at 10:00am through Ticketmaster. Ticketmaster customers may log on to Ticketmaster.com or call Ticketmaster’s national toll free Charge By Phone number 1.800.745.3000.  Tickets will also be available at the Mohegan Sun Box Office beginning on Saturday, February 17th, subject to availability.
Prior to “GOOD VIBES,” Mraz – who only last night concluded his acclaimed (and twice extended) Broadway debut run in the hit musical, Waitress – is poised to embark on a more intimate live tour, dubbed “An Evening With Jason Mraz, Solo Acoustic.” Those dates begin Thursday, March 8th at Raleigh, NC’s Raleigh Memorial Auditorium and then continue through the month.

Mraz recently celebrated the 15th anniversary of his RIAA platinum-certified major label debut album, WAITING FOR MY ROCKET TO COME, with the album’s first-time-ever vinyl release. The WAITING FOR MY ROCKET TO COME double LP is available now on standard black vinyl at all music retailers carrying vinyl records (see here); an orange vinyl edition is exclusively available via Barnes & Noble. All vinyl editions feature expanded artwork by Robert Fisher and Alison Dyer, plus lyrics and new liner notes by Mraz.

As PEOPLE recently noted, WAITING FOR MY ROCKET TO COME launched Mraz “from the Southern California coffee house scene into global stardom and the forefront of contemporary American singer-songwriters.” Released October 15, 2002, “the album indeed propelled Mraz to the forefront of contemporary American Pop, fueled by a trio of indelible hit singles in “You And I Both,” “Curbside Prophet” and the #1 favorite, “The Remedy (I Won’t Worry).” The latter single proved Mraz’s breakthrough, ascending to the Top 15 on Billboard’s Hot 100 while also reaching the top of the Top 40 Adult Recurrents chart.

MORE ABOUT JASON MRAZ:
Jason Mraz has quietly amassed a diverse fan-base throughout all parts of the globe. Since getting his start in coffeehouses in San Diego, Mraz has brought his positive message and soulful, Folk-Pop sound to rapt audiences around the world through his vibrant recordings, humorous live performances and philanthropic efforts. Along the way, he has earned numerous platinum certifications for his various releases, made Pop history with his record-breaking classic single, “I’m Yours” and “I Won’t Give Up,” racked up two Grammy Awards, won the prestigious “Songwriter Hall of Fame Hal David Award” and has sold out amphitheaters and arenas across the globe, including sell-outs at The Hollywood Bowl, Madison Square Garden and London’s O2 Arena.

A dedicated artist and gentleman farmer, Mraz is first and foremost a committed global citizen. His impassioned social activism and philanthropic efforts span from environmental advocacy to ardent support for human rights. His own Jason Mraz Foundation serves to shine for arts education and the advancement of equality. Through it all, Jason Mraz continually confirms and celebrates music’s myriad forms and miraculous power, inspiring and delighting his countless fans around the world.