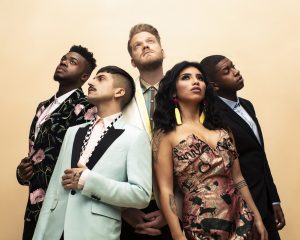 UNCASVILLE, CT (September 20, 2018) – Three – time Grammy Award – winning and multi – platinum selling artist Pentatonix has announced the release of their fourth holiday album, Christmas Is Here! for October 26th.  To accompany the album, Pentatonix will embark on a 17 – date The Christmas Is Here! Tour, where they will perform live back – to – back shows at Mohegan Sun Arena on Saturday, December 8th and Sunday, December 9th at 7:00pm.

Tickets are $65.00 and $45.00 and go on sale Friday, September 28th at 10:00am through Ticketmaster. Ticketmaster customers may log on to Ticketmaster.com or call Ticketmaster’s national toll free Charge By Phone number 1.800.745.3000.  Tickets will also be available at the Mohegan Sun Box Office beginning on Saturday, September 29th, subject to availability.

Ahead of the Christmas Is Here! album, Pentatonix is releasing their cover and arrangement of Danny Elfman’s “Making Christmas” from Tim Burton’s The Nightmare Before Christmas, on September 28th.  Their three previous holiday albums have all reached #1 on Billboard’s Digital Albums Chart, #1 on Billboard’s Holiday Albums Chart and have charted on the Billboard 200 Chart with two of the albums reaching #1.  Additionally, all of the albums have been certified gold, platinum or multi – platinum.

Pentatonix has sold nearly 10 million albums in worldwide consumption and performed for hundreds of thousands of fans at their sold out shows across the globe. Their YouTube channel boasts more than 15.5 million subscribers, yielding over 3.4 billion video views. Their 2015 self – titled album is certified gold after debuting #1 on Billboard’s 200.

Additionally, nine of their albums reached the top 10 on Billboard’s 200 chart (two albums reaching #1) and received multiple RIAA certifications for multi – platinum, platinum and gold selling albums and singles. Their tracks, “Mary, Did You Know?” and “Hallelujah” were certified platinum, while the Pentatonix original, “Can’t Sleep Love,” was certified gold.  The group has had two holiday specials on NBC, released their tour documentary – On My Way Home – in 2015 and appeared in the feature film, Pitch Perfect 2.