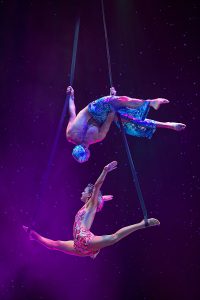 UNCASVILLE, CT (September 24, 2018) – Mohegan Sun rings in the New Year with dazzling performances of Cirque Celebration 2019, a unique and exclusive cirque celebration from the famed Cirque Dreams entertainment brand and Broadway director Neil Goldberg. This electrifying stage production will be performed in Mohegan Sun Arena and presented in – the – round offering guests a 360 degree view of the action.  Three exciting performances are scheduled for December 29th at 7:00pm and Sunday, December 30th at 3:00pm and 7:00pm.

Tickets are $25.00 and go on sale Saturday, September 29th at Noon through Ticketmaster. Ticketmaster customers may log on to Ticketmaster.com or call Ticketmaster’s national toll free Charge By Phone number 1.800.745.3000.  Tickets will also be available at the Mohegan Sun Box Office beginning on Sunday, September 30th, subject to availability.

Cirque Celebration 2019 is a 75 – minute heart – pounding, non – stop colorful explosion of athleticism, acrobatic audacity and festive imagination. Sparkling aerialists take flight while glistening transformations reveal superhuman displays of power, strength and gravity – defying imagination.  With spectacular costumes and an original score, audiences will marvel at an array of awe – inspiring characters and feats that will leave you breathless.  Over 20 performers from 10 countries showcase world – class skills in this Cirque Celebration 2019 celebration show for the entire family.

Neil Goldberg works with major celebrities, artists, holds various industry, leadership and Board of Director positions and is founding philanthropist of the Neil Goldberg Dream Foundation established to enrich the arts. Cirque Dreams Holdings LLC is a division of the VStar Entertainment Group of quality family shows and experiences worldwide.