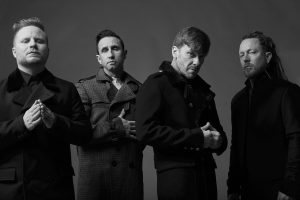 Tickets are $58.50, $48.50 and $38.50 and go on sale Friday, October 5th at 10:00am through Ticketmaster. Ticketmaster customers may log on to Ticketmaster.com or call Ticketmaster’s national toll free Charge By Phone number 1.800.745.3000.  Tickets will also be available at the Mohegan Sun Box Office beginning on Saturday, October 6th, subject to availability.

Selling more than 10 million albums worldwide, Shinedown has 11 platinum and gold singles and four platinum and gold albums and averages more than 3.3 million monthly listeners on Spotify as one of the most – listened – to Rock bands on the platform.  Shinedown’s sixth album, ATTENTION ATTENTION, brings an uproot convention and delivers a personal, poignant and powerful body of work that evolves from ruin to reclamation to revelation. Leading the charge for 21st Century Rock by uncompromisingly challenging themselves and occupying the cutting edge, Shinedown engenders diehard love among millions of global fans. The band’s unmatched domination of multi – format Rock radio commenced with their 2003 platinum – certified debut “Leave A Whisper” and its gold – selling 2005 follow – up “Us and Them.” 2008’s Billboard Top 10, double – platinum LP The Sound of Madness remained on the Top 200 Chart for a staggering 120 consecutive weeks and made Rock history with six #1 singles including the gold “Devour,” platinum “If You Only Knew,” and the triple – platinum breakthrough “Second Chance.”

After contributing the gold – certified “Diamond Eyes” for The Expendables film and “Her Name Is Alice” to the album Almost Alice inspired by Tim Burton’s Alice in Wonderland, the band seized #1 on the Billboard Top Rock Albums Chart and #4 on the Top 200 with 2012’s gold – certified Amaryllis, which launched three #1 Active Rock anthems: “Bully,” “Unity,” and “Enemies.” 2015’s Threat To Survival marked their third straight Top 10 debut on the Top 200, arriving at #5 while also debuting at #1 on Billboard‘s Top Rock Albums Chart and bringing Shinedown’s total count of number one rock singles to 12 thanks to hits like “Cut the Cord” and “State of My Head.” Every one of the singles released over Shinedown’s nearly two – decade career has ascended to the Top 10 – a feat unmatched by any other Rock band, now or ever before.