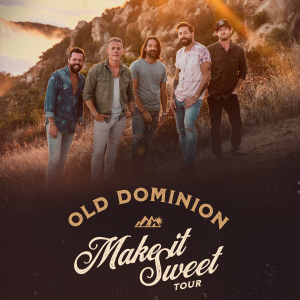 Tickets are $69.50, $49.50 and $39.50 and go on sale Friday, October 19th at 10:00am through Ticketmaster. Ticketmaster customers may log on to Ticketmaster.com or call Ticketmaster’s national toll free Charge By Phone number 1.800.745.3000.  Tickets will also be available at the Mohegan Sun Box Office beginning on Saturday, October 20th, subject to availability.

The upbeat “Make It Sweet” unlocks the next chapter of Old Dominion. Rustling acoustic guitars and pedal steel bristle up against heartfelt verses before the hashtag – worthy handclap – driven refrain “Life is short, make it sweet” takes flight. The song culminates on a rafter – reaching guitar solo and show – stopping vocal performance.

Old Dominion consists of lead singer Matthew Ramsey, lead guitarist Brad Tursi, multi – instrumentalist Trevor Rosen, bassist Geoff Sprung, and drummer Whit Sellers.  Recently releasing their highly anticipated sophomore album, Happy Endings, which debuted at #1 on the “Billboard Top Country Albums Chart” and #7 on the Top 200. Upholding an unbelievable hot streak, the album features three singles “Written In The Sand,” “No Such Thing As A Broken Heart” and “Hotel Key,” which hit #1 on Billboard Country Airplay and Mediabase charts. This achievement marks the Platinum – selling country quintet’s sixth total #1s. In addition to their ACM win, Old Dominion has also been nominated for an ACM for “Album of the Year,” as well as an American Music Award, two CMA Awards, and recently nominated for “Top Country Duo/Group Artist” at the Billboard Music Awards.

The group emerged as one of the hottest breaking bands in country music with their debut album Meat And Candy, which fused clever lyrics and an infectious sound. The album, which was certified Gold by the RIAA, included several top selling hits including “Break Up With Him” (Platinum), “Snapback” (Gold) and the anthemic “Song For Another Time,” which hit #1 the on Billboard Country Airplay and MediaBase charts. Following its release, the band was notably named ACM New Group of the Year, ACCA Breakthrough Group of the Year, AIMP Songwriter Artist of the Year and Music Row Breakthrough Artist of the Year.