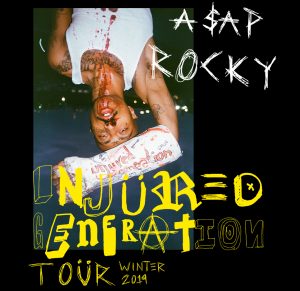 Tickets are $59.00, $49.00 and $39.00 and go on sale Friday, November 2nd at Noon through Ticketmaster. Ticketmaster customers may log on to Ticketmaster.com or call Ticketmaster’s national toll free Charge By Phone number 1.800.745.3000.  Tickets will also be available at the Mohegan Sun Box Office beginning on Saturday, November 3rd, subject to availability.

The tour comes on the heels of the release of A$AP Rocky’s highly – anticipated third studio album, TESTING, which has garnered over 1 billion streams worldwide, landing at #1 on the iTunes charts in 16 countries upon release. TESTING launches a new era for Rocky, exploring new sounds and ideas in an unparalleled musical landscape where he continues to break the mainstream mindset with sonics rarely heard in Hip – Hop.  This album picks up where Rocky last left off, weaving mind – melting aural psychedelics into Hip – Hop that is, at times dark and confessional, and in other moments uplifting and celebratory. Rocky is joined on TESTING with features from Juicy J, T.I., Moby, Frank Ocean, French Montana, FKA twigs, Skepta, Kid Cudi and Kodak Black.

The past two years have also seen Rocky’s creative agency AWGE in the spotlight, launching partnerships with Calvin Klein, MTV, GUESS, Under Armour, Courvoisier, Dior, Mercedes Benz and JW Anderson and also launching the careers of new artists such as Playboi Carti, Smooky MarGielaa and more.