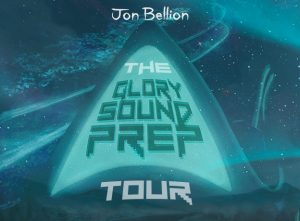 Tickets are $39.00 and $29.00 and go on sale Friday, November 16th at 1:00pm through Ticketmaster. Ticketmaster customers may log on to Ticketmaster.com or call Ticketmaster’s national toll free Charge By Phone number 1.800.745.3000.  Tickets will also be available at the Mohegan Sun Box Office beginning on Saturday, November 17th, subject to availability.

Bellion will be touring in support of his new album, Glory Sound Prep, which includes the singles “Conversations with my Wife,” “JT” and “Stupid Deep.”  It includes collaborations with Grammy – winning producer Quincy Jones, Roc Marciano, RZA, B. Keyz and Travis Mendes. Billboard said, “Throughout the 10 – track album, Bellion seamlessly intertwines sounds of Pop, R&B, Hip – Hop and Rock through his electrifying songs.”

Glory Sound Prep is the follow – up to the New York – based artist’s RIAA Gold – certified 2016 debut album, The Human Condition, which has sold more than 1.5 million adjusted albums and amassed upwards of 1.7 billion cumulative streams. “All Time Low,” the lead single, was a Top 10 hit at Top 40 radio and is now certified 3x Platinum. All three legs of The Human Condition Tour sold out.

Bellion got his start with a series of mixtapes featuring his original songs – all recorded in his parents’ basement. He built a remarkable following by sharing his music directly with listeners, giving away more than 200,000 free downloads of 2014’s The Definition and playing live for fans on two sold – out national tours. Also a sought – after collaborator, Bellion co – wrote and produced “Trumpets” for Jason Derulo and co – wrote the Grammy award – winning, 10x – Platinum hit “The Monster” for Eminem and Rihanna. He co – wrote and co – produced Christina Aguilera’s recent single, “Fall in Line” featuring Demi Lovato.

Mohegan Sun Arena is now ranked consistently among the top venues in the world according to Billboard Magazine, Pollstar and Venues Now. It has won “Casino of The Year” at the Country Music Awards in 2008 & 2010 and in 2013, was voted “Arena Of The Year” at the G2E Global Gaming Conference in Las Vegas.  Mohegan Sun Arena was also ranked among the top 10 arena venues in the nation for 2014, regardless of size. In 2015, Mohegan Sun took home the IEBA award for “Casino of the Year.”  Mohegan Sun also won “Casino of the Year” in 2 categories at the 2013 & 2016 Academy of Country Music Awards. For more information on concerts and other great events, visit Mohegan Sun. For information on this week’s schedule, call the Entertainment and Special Events hotline at 1.888.226.7711, ext. 27163.