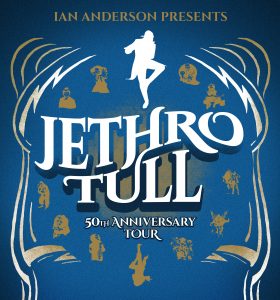 Tickets are $55.00, $45.00 and $35.00 and go on sale Friday, December 14th at 10:00am through Ticketmaster. Ticketmaster customers may log on to Ticketmaster.com or call Ticketmaster’s national toll free Charge By Phone number 1.800.745.3000.  Tickets will also be available at the Mohegan Sun Box Office beginning on Saturday, December 15th, subject to availability.

The anniversary concert will feature a broad mix of material, some of it focusing on the earlier formative period through to the “heavy hitters” of the Tull catalogue from the albums: This Was, Stand Up, Benefit, Aqualung, Thick As A Brick, Too Old To Rock And Roll: Too Young To Die, Songs From The Wood, Heavy Horses, Crest Of A Knave and even a touch of TAAB2 from 2012.

Anderson says, “We continue to present the 50th Anniversary concerts in many countries and regions not visited in 2018, and also many Tull repertoire shows in Europe. There will be, of course, my usual charitable cathedral and church concerts in December. In the USA – many would argue – 2019 is really the 50th Anniversary for US fans since we first visited in early 1969.”

Jethro Tull have released 30 studio and live albums, selling more than 60 million copies worldwide. During their 50 – year history, the band has performed over 3,000 concerts in more than 50 countries, playing 100+ concerts each year.