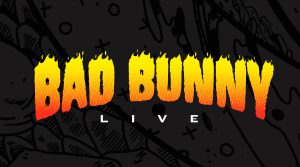 Bad Bunny, originally from Puerto Rico, is most recognized for his explosive and infectious Trap songs. Rolling Stone magazine has named him “The Four – Billion – Stream Man leading the Latin Trap Explosion.” This talented artist has demonstrated his already overwhelming power, influence and demand with completely sold – out concerts for his “La Nueva Religión Tour” (The New Religion Tour) all over Europe, Latin America and the U.S. His unmistakable voice and rhythm have led him to transition to the general market, where he is already creating waves of revolution with his participation in “I Like It” alongside Cardi B and J Balvin, which reached #1 on Billboard’s Hot 100 chart and has continued to dominate the chart in the top 3 position. He has been nominated into the iHeart Radio Music Award, MTV VMA’s, Latin AMAs, Latin Grammys and E! People Choice Awards. Earlier this fall, Bad Bunny celebrated being the face of the cover of FADER magazine where the artist boasts a feature story that perfectly recaps his story and properly introduces him to the American market as the Latin Trap superstar he has become.